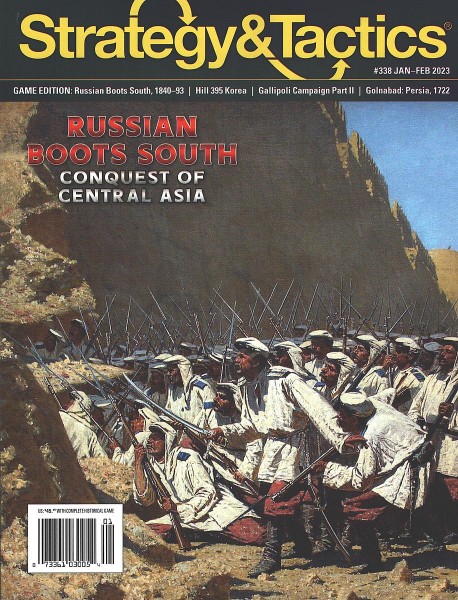 Russian Boots South: Conquest of Central Asia: In 1840 Central Asia was a distant frontier for the Russian Empire, but within 50 years the region had been fully integrated into the Czar’s realm. That was accomplished only after many hard-fought campaigns across the area’s vast deserts and steppes.

Hill 395: Korea, October 1952: In the fall of 1952, the Chinese ordered an offensive against the central sector of the UN front in Korea. It was intended to inflict further casualties on the UN, recover previously lost terrain, and gain combat experience for newly rotated Chinese units. The resultant 10-day battle for Hill 395 became an epic in the history of South Korea’s army.

The Gallipoli Campaign, Part 2: A Strategic & Operational Analysis: The conclusion of our two-part strategic and operational analysis of the failed 1915–16 campaign at the mouth of the Dardanelles. In this issue we cover from the onset of the stalemate through to the final Allied evacuation.

End of the Safavids: The Battle of Golnabad, 1722: In Safavid Persia in the early 1800s, raiders out of the Caucasus, Arabia and Baluchistan were despoiling the northern, southwestern and southeastern borders. At the same time, the Ottoman and Russian Empires were preparing to cut away large chunks of territory, and warfare was constant against the Moghuls. All that came to a head at the Battle of Golnabad in 1722.

Russian Boots South: Conquest of Central Asia: The game system is based on the previously published S&T games: They Died with Their Boots On, Volumes 1 & 2, Julian, and Sepoy Mutiny. Russian Boots is a two-player wargame simulating the Russian conquest of Central Asia during the 1850s to 1890s. There are two opposing players: Russian Empire and Khanates. The Russian Empire player represents the theater command of an autocratic empire. The Khanate player represents the various independent kingdoms and tribes of the region, with the possibility of intervention from forces on the periphery. Victory conditions are asymmetrical, with the Russians trying to conquer Central Asia and the Khanates trying to prevent this. There are three scenarios, each representing a different situation. Each game turn (GT) represents a from one to six years, depending on the pace of operations. Each hexagon on the map represents 80 to 90 kilometers (53 miles). Each Russian unit represents one or two battalion-sized grouping of companies or squadrons. Other units represent brigade or division-sized units, along with corresponding logistics, as well as groupings of tribesmen or other fighters ranging between 1000 to 5000 fighters. Generals represent key commanders, their staffs, and an elite guard.