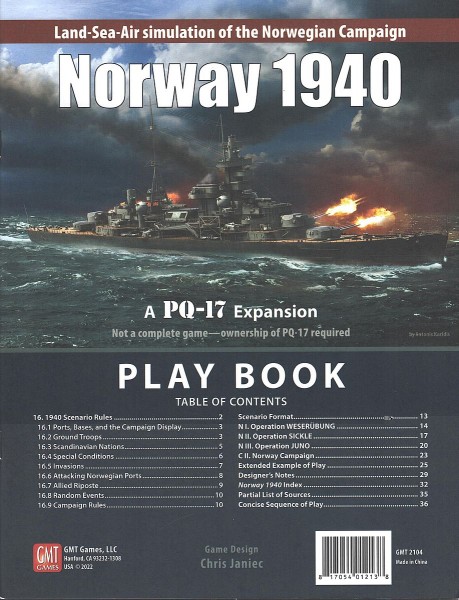 Beschreibung Downloads Bewertungen 0
Beschreibung
From GMT: It is Spring 1940, and both the British and the Germans have plans to invade... mehr
Menü schließen
Produktinformationen "Norway 1940: PQ-17 Expansion"

It is Spring 1940, and both the British and the Germans have plans to invade neutral Norway.  The British still have the French on their side, while the German Kriegsmarine will never be larger.  Who will strike first?

Norway 1940 is a ziplock expansion for PQ-17 that adds all the British, French, Polish, and German naval and air units needed to re-fight this tense air-naval battle, including such seldom-seen ships and aircraft as the repair ship HMS Vindictive, German Type II U-boats, Blackburn Skuas and Rocs, and early Ju88 heavy fighters.  Special rules reflect the unique conditions of the campaign, such as Scandinavian neutrality, Norwegian coastal defenses, faulty German torpedoes, shore bombardments, and Allied establishment of a forward naval base (historically in the Lofotens).  And just as in the parent game, secretly determined special conditions offer new opportunities and threats to both sides.  Will the British pre-empt the German invasion?  Will the Germans attempt to break out into the Atlantic with their heavy ships?  Will the Allies elect to stay in Narvik instead of evacuating with the fall of France imminent?  Or will the Germans make a daring attempt to seize Iceland before the Allies can occupy it in force?

Norway 1940 includes three operational scenarios highlighting key periods of the campaign.  Operation WESERÜBUNG covers early April 1940, with both sides attempting to land ground forces in neutral Norway.  Operation SICKLE covers the second half of the month, as the Allies counter-attack after the successful German invasion.  And Operation JUNO depicts the end of the campaign in early June, when the Germans attempt to interfere with the Allied offensive on Narvik, unaware that the Allies have already decided to evacuate (or have they?).  Plus a 1940 Campaign scenario allows players to refight the entire 10-week campaign, including a semi-abstract system for ground operations that will ultimately decide victory in the game.

Fire in the Lake, 3rd Printing