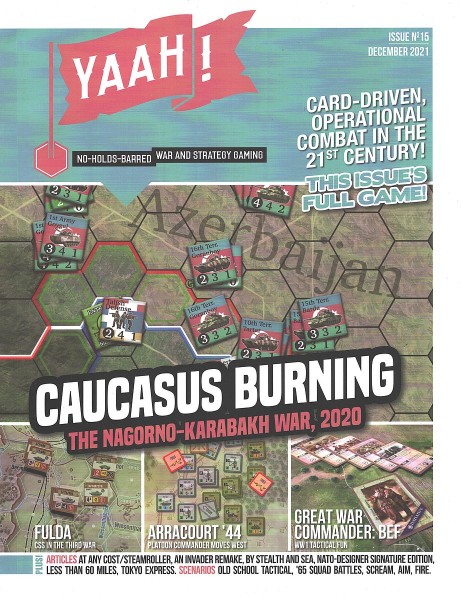 Here's what's jammed into its 90+ pages:

FREE PLATOON COMMANDER DELUXE EXPANSION ADDED! We have added 10 more pages, and an entire new Platoon Commander Deluxe expansion with 22 x 1" counters, and 4 scenarios, titled, Arracourt '44. These counters, as well as the counters for Nagorno will be printed to the same high (and thick) standards as the FPG boxed games.

First we have the clever, card-driven, hex and counter executed game. Titled, Caucasus Burning: The Nagorno-Karabahk War, 2020, the simulation is an operational design by Greg Porter covering the Nagorno-Karabahk War of 2020. You'll command formations of T-90 tanks, BMP-equipped mechanized infantry, drones, cruise missiles, and squadrons of attack aircraft as you simulate the war between Armenia and Azerbaijan, which took place in the fall of 2020. Units represent battalions grouped into brigades. Maneuver and attacks in the game are done via actions played from a deck of cards, and each pass through the deck represents 2 days and nights of fighting. A game of Caucasus Burning: The Nagorno-Karabahk War, 2020 will probably take a little less than 10 passes through the deck, so it will run a little faster than the actual war.

Of course Yaah! isn't only about its game, there are some darn good articles to boot. In the Fulda article, Norm Lunde takes an in-depth look at Compass’s modern entry into the CSS series. Next is a comparative gem by John Burt, one of the best writers in the boardgame industry. John compares and contrasts Tiny Battle Publishing’s Steamroller Tannenberg 1914 with some other company’s game about the same war. I think it’s titled At Any Cost or For a Few Pennies More, or something like that. What he doesn’t mention is that I wanted to put a picture on the box that had German infantry in those sharp-looking helmets (Stahlhelm… or StylinHelm as we say in Franklin County) that they wore in late WWI, but Herm told me that they didn’t issue them until 1916. Damn.

We also present two pieces by composer Nick O’Neil; one on Great War Commander (a game I personally love) and another covering By Stealth and Sea, designed by David Thompson. Regular Roger Leroux (don’t pronounce the “x”), spills some ink on the classic High Frontier for All, and Arrigo Velicogna follows that up with a pair of semi-modern war reviews: NATO Designer Signature Division and Dogs of War. Our final game-looky-loo is a nice piece by Eddie Carlson, on Tokyo Express. Finally, we have a beautiful picture piece on how Clay Meyer made his own copy of Herm Luttmann’s Invaders from Dimension X. It has to be seen to be believed.

But, as John Madden would say, “wait a minute!” Gaming articles aren’t everything that we have in Yaah! Magazine. We also have crammed 5 scenarios into this issue including, a ’65 Squad Battles skirmish, two Old School Tactical fistfights, a Scream, Aim, Fire battle, and a solitaire scenario for Platoon Commander Deluxe. Good fun for you Flying Pig Game and Tiny Battle Publishing add-on scenario lovers.

So that’s it; at 90+ pages the chunkiest magazine yet from Flying Pig Games, and the first to include a 54-card deck.