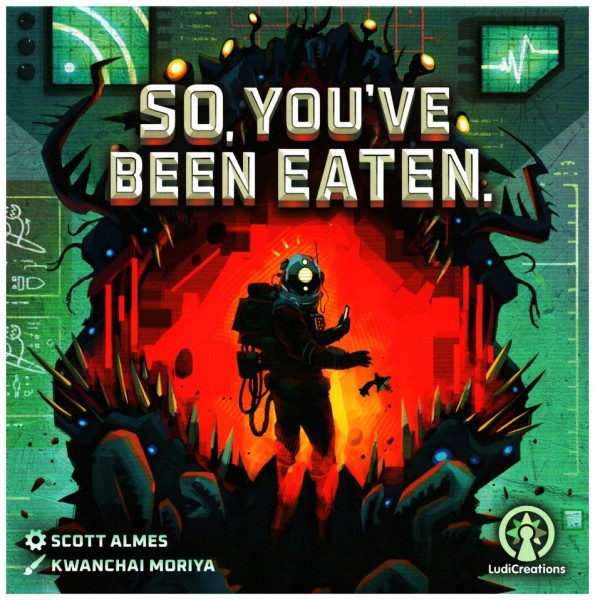 A rookie miner and an annoyed beast. In space!

So, you've been eaten. Don't worry, this is simply an occupational hazard. In fact, it is fairly common among Deep Space Miners (5th class), and some say that it is almost unavoidable. And, well, it is. Especially since the Crystals that you seek happen to be inside giant space Beasts. To mine them, you need to, well, be eaten.

Should you achieve your objective and mine enough Crystals to meet your quota, it is then cost-effective for the company to activate your jetpack and extricate you from the proverbial belly of the Beast.

In the event that the Bacteria present in the Beast overwhelm you and you are digested, do not despair. Your non-organic parts will certainly be useful in the mining exploits of future Miners. In fact, you may encounter some such pieces of equipment in your expedition, remains of less-than-qualified recruits from past attempts.

Finally, it could transpire that you do not collect the necessary Crystals by the time you reach the end of your adventure, without the Beast having digested you.

In this case, you will then exit the Beast from the other end than the one you entered. Alive... and yet forever changed. In this case we will have to evaluate your performance against that of the Beast’s efforts to consume you.

In So, You've Been Eaten. the Miner and the Beast will face off against one another.

The game ends in a win for the Miner if they collect all 8 different Crystals, and the Beast wins by digesting the Miner after four Bacteria of the same type have attacked.

Of course, there’s always the possibility that the Miner will simply pass through the Beast’s system, and then the player with the most points wins!

So, You’ve Been Eaten. can be played as:

So, you've been eaten. is an asymmetric 30-min game of survival and profit for 0 - 2 interstellar miners/beasts.

The Captain is Dead

The Captain is Dead: Lockdown