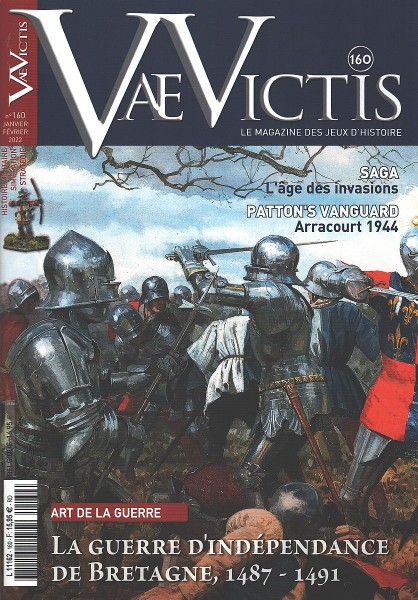 The French-Breton War simulates the conflict between the Kingdom of France and the Duchy of Brittany. Confronted with France’s rising power and the decline of his duchy, François II of Brittany, and later his daughter the Duchess Anne, attempted to form a rear alliance through marriage with Maximilien of Austria in order to unite the two houses. France was the preeminent country in Europe after the Hundred Years War. The great feudal Bretons were drawn to France’s strength and influence and swayed between loyalty and betrayal of the Duke of Brittany. Brittany’s independence was played out at the end of the century but its defeat during the battle of Saint-Aubin du Cormier on 24 July 1488 sealed its fate. The war continued for a few more years thanks to the support – gold and soldiers – of England, Spain, Gascony and the Holy Empire. The war finally ended with the defeat of the Bretons despite their resistance and the marriage of Duchesse Anne to King of France Charles VIII, thereby sealing the annexation of the duchy to the kingdom.

This game is part of the series l’Or et l’acier (Gold and Steel), that simulates the conflicts of the end of the 15th and beginning of the 16th century at the strategic and tactical level (the games from the same series are Les guerres de Bourgogne 1474-77 (VV), La guerre du Bien public 1465 (VV) and Cortés et la conquête du Mexique 1519-21 (VV). One counter represents 1 500 to 2 000 foot soldiers and 750 to 1 000 cavaliers or one hundred cannon - of all types and calibres.

The game is played in 13 turns with each turn corresponding to a season (spring, summer, autumn). The winter turn is not played. The opponents are the French and the Bretons.

This game is both strategic, with the armies moving on the map through the zones representing the duchy of Brittany, and tactical, with the armies meeting and all the combattants of the time deployed in order of battle (on several lines and on the wings). All the combattants of this period, such as mounted men or foot soldiers, mercenaries (English archers, Gascon arbalétriers, German lansquenets and Swiss pikemen), archers, vougiers, piquiers, couleuvriniers (first arquebusiers), militia, canons, etc., combat on a tactical map displaying a typical 15th century battlefield. The commanders make it possible to use tactical markers which are played during the combat turns (charge, ditch, unmounted men-at-arms, fence, shower of arrows, cut and thrust, battery fire, harassment fire).

The diplomacy table indicates the allegiance of the great lords (Laval, Rieux Rohan, Albret) to one camp or the other at the moment of the battle. Their allegiance may range from unwavering support to doubt to change of camp which can have consequences on the battle (their troops do not combat or may betray).

The victory points are obtained by allying these great lords or by eliminating them, by winning major battles (involving on both sides more than ten strength points or 10 000 men), through the siege of an important town with a fortress value of 2 or more (Rennes, Nantes) and by controlling all or part of the nine zones designated as strategic objectives.

Throughout the game, the Bretons receive a random number of reinforcements from their allies – England, Spain, Saint-Empire –, thereby balancing the forces against the French military power and offering each camp the opportunity for victory.

This simulation of this conflict will provide you with historical accuracy, excitement, playability, simplicity and fun. Will you enable the Bretons to preserve their independence against the appetite of the French or will you attach the Duchy to the Kingdom of France?

We printed the English Rules for You (in Colour) and send them together with the Magazine!