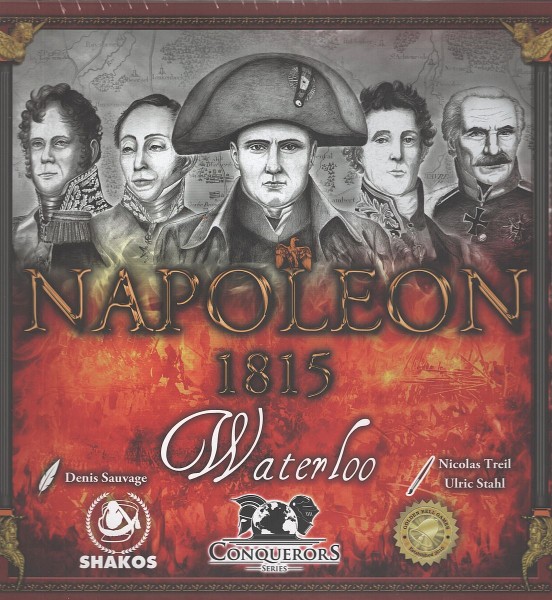 Beschreibung Videobeiträge Downloads Bewertungen 0
Beschreibung
From Shakos: History has written the story of Waterloo many different ways, but, in the... mehr
Menü schließen
Produktinformationen "Napoleon 1815 - Waterloo"

History has written the story of Waterloo many different ways, but, in the end, it is always the same story.

This is your opportunity to write something different.

Napoléon 1815 is the third instalment in The Conquerors, a series devoted to the great strategists of history. Following on from Napoléon 1806 and Napoléon 1807, Napoléon 1815 brings its own unique challenges to this well-tried and highly acclaimed campaign system.

For up to three players, assume the role of Napoleon, Wellington, or Blucher, making the key decisions that will determine the fate of Europe. As Napoleon, will you adopt your own version of his “strategy of the central position,” driving a wedge between the enemy armies and then annihilating each of them in turn? Or perhaps you will choose a different course, or find that change is forced upon you?

Time is of the essence, for if the armies of Wellington and Blucher do join, the emperor’s final throw of the dice is likely to end in defeat.

Napoléon 1815 is intended for both the seasoned grognard as well as eager young conscripts with a desire to understand how history is made. A simple but historically faithful set of rules means that all the key aspects of campaigning in the Napoleonic era are present for players to interact with. Both subtle bluff and the blunt application of massive force will have their place as events unfold.

The history books tell us that Waterloo itself was fought on an overcast day, June 18th, that had been preceded by a night of torrential rain. Denis Sauvage, born on a Waterloo anniversary nearly two hundred years later, has looked back to that other time, a time when armies gathered and the cannon thundered. This is a game he was destined to create. Telling a different story is now up to you.

Wellington's Victory - The Battle of Waterloo,...