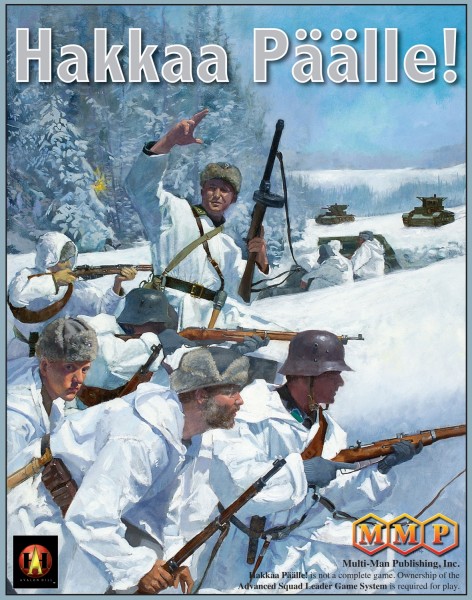 This is a reprint of the 2015 printing (with a few minor errata corrections).

Hakkaa Päälle! (Advanced Squad Leader Module 14) provides the ASL player with the complete order of battle for the Finns, including every major vehicle, gun, and squad type that saw combat during World War II. Chapter H distills years of research into pages of detailed notes on the guns and vehicles involved. Included along with three new Finnish squad types are the revised Chapter A rules to handle them.

Finnish ordnance and armor throughout this period are represented from the single Landsverk armored car that was the only combat-worthy Finnish AFV at the start of the Winter War, through the end of the Lapland War, when Finnish armor included captured Russian AFVs and Sturmgeschuetz purchased from Germany. Modern tanks like the T-34/85 or StuG IIIG were in the distinct minority, however, and the Finnish player will often find himself equipped with obsolete tanks such as T-26s and T-28s when facing the enemy.

The Soviet Union was Finland’s chief adversary, and Hakkaa Päälle! also contains new vehicles and Chapter H notes for the Russians. Fan-propelled sleds (aerosans, both armed and not), ad-hoc armed LANO trucks, early war versions of the T-26 (the two-turreted T-26 M31 and the flamethrower-armed OT-26, among others), up-armed T-28s, and the experimental SMK and T-100 tanks are all included. Additionally, a number of Lend-Lease Vehicles (Lee, Matilda II, Valentine VIII, Churchill III, etc.) now see Russian counter form. To simulate the lackluster performance of the Russian forces during the Winter War, SSR-invoked rules for Russian Early War Doctrine are included.

Captured French tanks such as the 38H 735(f) and the 35-S 739(f) used by the Germans in Finland are included in German colors, along with similar German AFV counters whose availability to ASL players was previously limited.

Player aid dividers include the National Capabilities Chart with the new Finnish squad types and other updates, backed by the standard OBA flowchart. Also enclosed are new rules for Prepared Fire Zones and Light Woods, transforming the battlefield for mapboards old and new. The heavily wooded mapboard 52 completes the package.

Hakkaa Päälle! is not a complete game. Ownership of the Advanced Squad Leader Game System is required for play.

MMP: ASL For King and Country

The Third Winter - The Battle for the Ukraine,...