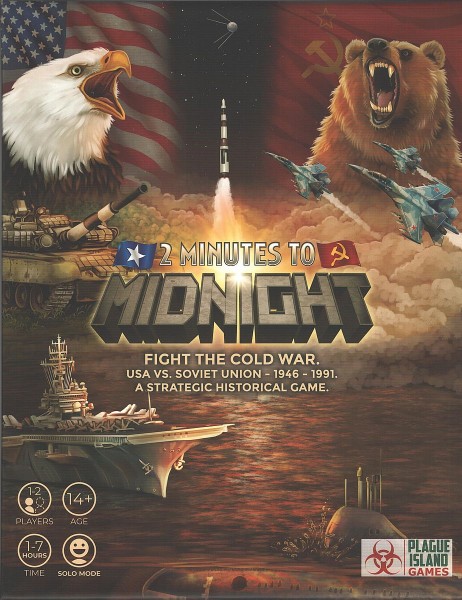 Beschreibung Videobeiträge Downloads Bewertungen 0
Beschreibung
From Plague Island Games: It is 1946,  World War Two has ended. This is where the... mehr
Menü schließen
Produktinformationen "2 Minutes to Midnight - Fight the Cold War 1946 - 1991"

It is 1946,  World War Two has ended. This is where the game begins - take charge.
As the US can you weather the storm, hold Europe together and counter the existential threat of Communism?
As the Soviet Union can you unite the world proletariat, and bring communism to the masses? And what of peaceful coexistence with the West?

2 Minutes to Midnight is a detailed simulation of the cold war covering the military, economics, politics, and trade - all in a playable package that hides the complexity and lets you focus on strategic choices.

Chit Pull - low/no downtime – the game constantly moves from one player to the other.

Historical Focus – the game puts you into the mindset of the US or USSR; you will find yourself balancing the competing needs of the space race, rushing to develop better missiles and worrying about national debt and Soviet reforms.

You can fight (even fighting world war three) - but it's not the core of the game.

The events - They'll throw you curve-balls you don't expect.  The whole game tells the story of the cold war, building a narrative as the game progresses.

Technology Race – Over the 40+ year stretch of the cold war technology was a burning issue. The USSR starts without the bomb, but a little ahead in the space race – how much can you push in one direction without being overwhelmed? And because it would have been too good an opportunity to pass up.. you can build a moon base or a doomsday device. Gee I wish we had one of those...

Interactive tutorial - Read a few pages of rules and learn the game by playing it - you can have this delivered and be into your first training game in less than half an hour.

Highly Re-playable - No two games really go the same - the cards come out in different orders and have different effects depending on what's happening.

Typhoon over the Pacific

Against the Odds - Battle for the Golan Heights