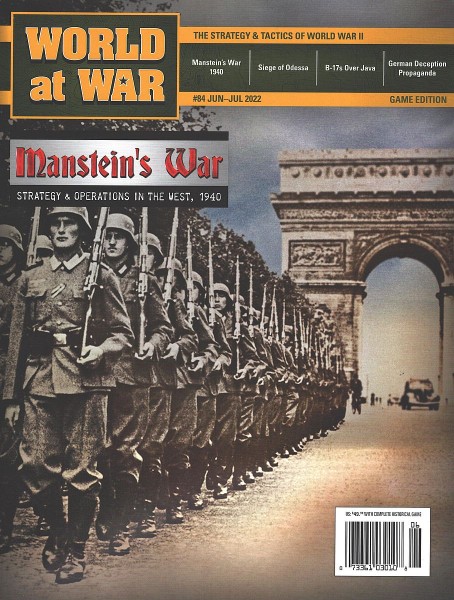 Manstein’s War: Strategy & Operations in the West, 1940: In May 1940 the Germans launched their invasion of the West, and in seven weeks defeated all the opposing armed forces. Credit for the plan that led to the victory is usually and mostly given to Erich von Manstein. Of course, as the proverb goes, success always has many fathers.

Odessa 1941: As Operation Barbarossa steamrolled east late in the summer of 1941, Hitler asked his Romanian ally to seize Odessa on the Black Sea coast. That port was key terrain: its capture would significantly improve the ability to logistically sustain German operations across the southern Ukraine. The resultant battle effectively wrecked Romanian Forth Army.

B-17s Over Java: The situation in the Far East had been tense as early as the summer of 1941. At that time the increasing tension between Japan and the US resulted in the latter adopting a strategy for the “defense” of the Philippines that would in part be conducted using an offensive capability based on long-range aerial fi repower—meaning B-17s.

Nazi Deception Propaganda: Bluffing the Credulous & Fearful: Hitler conducted his diplomacy with bluff, concealing German military weakness with deception. There were two main tracks in the German deception program, one was about aerial capabilities and the other ground force strength. as the proverb goes, success always has many fathers.

Manstein's War: Decision in the West 1940 is a two-player wargame of the German offensive in Western Europe in May-June 1940 in which the Wehrmacht seized a stunning victory over Allied forces in the Low Countries and France. The game uses a variant of the Boots system to model command, control, and logistics on an operational scale. Both players can fight a campaign of mobility and decisive battles.

The general structure of the game is that each player uses command markers to activate their forces, which are divided into sub-commands (army groups and similar echelons). Each player has special markers which provide additional operational capabilities. Can you turn the tide of history in that decisive spring of 1940?

Counter-Attack: The Battle of Arras, 1940