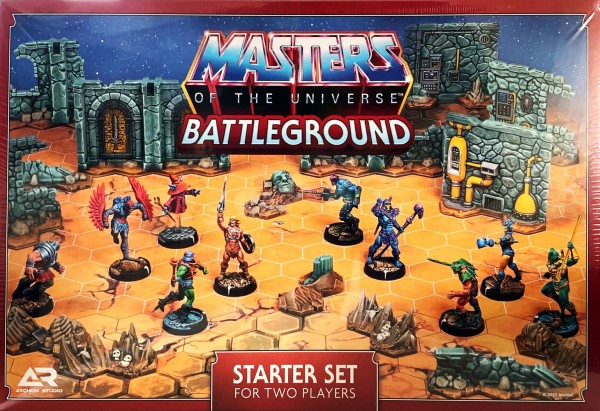 Experience fast, action-packed battles with the Masters of the Universe: Battleground miniature game, based on the beloved 'Classics' toy series. Pick He-Man's or Skeletor's faction and compete with a second player to control the power of Eternia. Gear yourself up with various weapons and magical items, use the terrain in your favor. An innovative activation system and numerous character build combinations will make each game unique and exciting.

Will Skeletor and his Evil Warriors conquer Castle Grayskull? Will He-Man and his friends manage to stop them? Will Orko succeed in casting any spells?

Masters of the Universe: Battleground is a skirmish miniature game for two players, where forces of good and evil clash in epic combat. This glorious battle will shake the earth and change the fate of the entire Eternia!

Players equip their characters with the most excellent weapons, spells, and equipment; then, they create decks consisting of 20 amazing fate cards. Those cards will be used to activate characters on the battlefield during the game. It is entirely up to the players how many cards they will use on each of their characters. Do you want to use all your cards on the mighty He-Man? Go ahead! However, it may be challenging to win this battle alone.
Unlike many skirmish games, players don't have to accept the outcome of the cruel dice. Masters of the Universe: Battleground provides many ways to control luck. Characters can spend mana to reroll even the most stubborn dice, perform a focus action to increase their chances, and use the environment to their advantage.

Gain victory points by knocking out the opponent's characters, claiming objectives, and fulfilling secret side missions. Whoever gathers the most victory points at the end of round four is a winner!

All elements come unpainted and unassembled and may require trimming and cleaning before assembly.

A Song of Ice & Fire Miniaturenspiel:...

POP! Funkoverse Strategy Game - Back to the...

PREORDER***Lanzerath Ridge - Battle of the Bulge