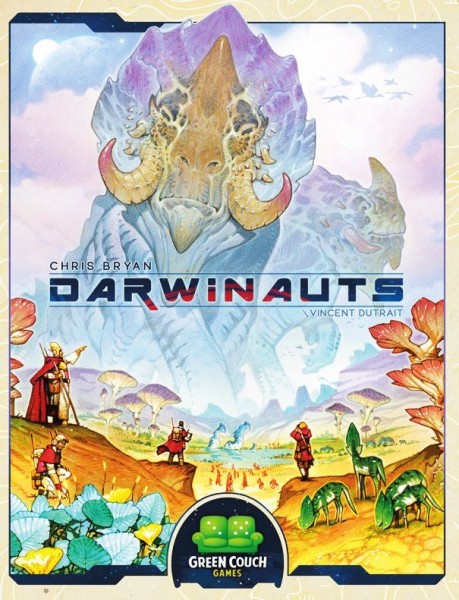 Congratulations! After decades of hard work, scientists have opened a portal to another dimension filled with alien life. You are one of the few brave enough to venture into this exciting but dangerous new land to research and record new species. The world watches to see the discoveries that will be uncovered. The media has dubbed you and your comrades “the Darwinauts” for daring to go beyond to record the new origins of species. You must work quickly to bring back records of the most exotic lifeforms to secure your place in history, but be careful, the portal is unstable and won’t remain open for long...The Rift is coming!

During the course of the game, a player takes 2 actions on their turn, selecting from 5 possible actions; place an explorer, place a tile, replenish tiles and remove explorers, discover a species, and record a species.

Whenever recording a species, a player immediately takes one of 5 possible bonus actions that allow the player to set themselves up for future turns or alter the landscape.

Players continue to take turns until The Rift Tile is revealed, making the portal to the new world unstable. Once The Rift begins, players add an additional phase to their turns, taking part in dismantling the landscape they have opened up for exploration.

The game comes to a close as they race to complete their tasks and return home. When the game ends, players receive prestige points for their recorded species and bonuses are earned for specializing in specific sets of species. The Darwinaut with the most points will win the game and go down in history as a pioneer in this new age of discovery.

Darwinauts is a game for 2-4 players, ages 13 and up and plays in 45 minutes.The visual world of Darwinauts was brought to life by legendary artist, Vincent Dutrait (Elysium, Lewis and Clark, New York: 1901, Rise of Augustus) who painstakingly crafted the various species by hand using the medium of oil pastels.

On the Origin of Species, 2nd Edition