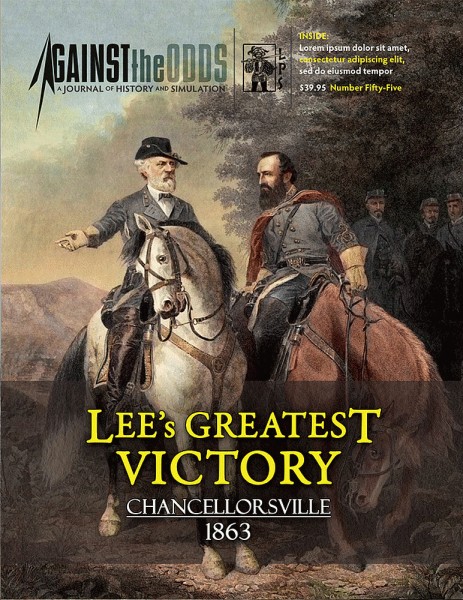 “My God! What will the Country say?"

The Chancellorsville campaign, which took place in and around Virginia’s Wilderness in May 1863, is considered by many to be Robert E. Lee’s masterpiece, a true triumph “against the odds.” Opposing Lee was Union commander Joseph “Fighting Joe” Hooker, who had devised a plan that seemed assured of success. His cavalry would raid deep behind Confederate lines, cutting Lee’s supplies, while Hooker and four of his seven infantry corps would march west, then south, and appear behind the Confederate defenses opposite the city of Fredericksburg.

No plan, however, survives first contact with enemy. With the advantage of interior lines and a great deal of audacity Lee would confound his opponent by continually bringing more rifles to the critical place at the critical time. And it didn’t hurt that Lee’s largest corps was commanded by one “Stonewall” Jackson. . . .

Lee’s Greatest Victory is an area-impulse game but one unlike anything seen before. Since the appearance of the “sunset die roll” nearly three decades ago players have alternated activating a single area, with variation coming in the form of an uncertain turn length. Play has a chess-like feel, with players able to act and react with a great deal of prior calculation. Short turns could be frustrating for one or both players. In this revolutionary development of the genre players no longer know how many impulses they, or their opponent, will have, creating both opportunities and crises that cannot be anticipated in advance—just like real combat. The “momentum” swings back and forth but rarely the same way twice. At the same time, each turn lasts as long as the players wish it to last, ensuring something will happen every turn.

Units of maneuver are Union divisions and Confederate brigades for the most part, with historical leaders present to provide a combat boost though at the risk of being wounded or KIA. Pontoon bridges and entrenchments are part of the basic rules while optional rules incorporate weather and optional units for both sides. Best of all, it's just six turns long and very playable in one sitting.

Playing time - Up to 3 hours

How challenging is it solitaire? - Poor

The Campaign for Vicksburg 1863 AD

Give Us Victories - The Chancellorsville...

Salem Church: East of Chancellorville 3-4 May 1863

On the Origin of Species, 2nd Edition

Against the Odds: Buffalo Wings Expansion

On the Origin of Species, 1st Edition