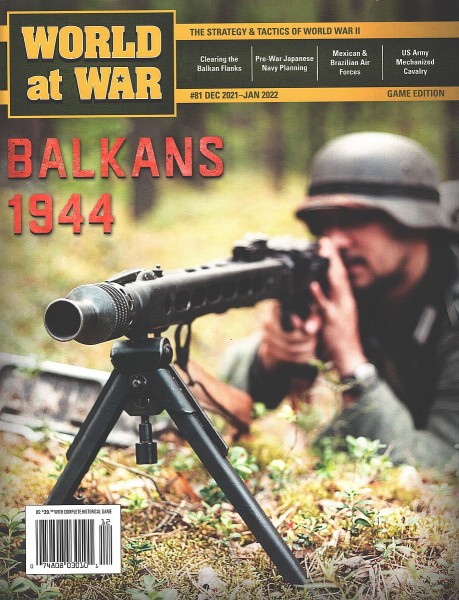 Clearing the Flanks: The Balkans, August–November 1944: By late July 1944, the Germans had suffered a crushing defeat in Belarus and were about to suffer another disaster in Normandy. Those catastrophes led them to withdraw divisions from Romania for deployment to other endangered sectors. On 20 August, 2nd and 3rd Ukrainian Fronts opened an offensive between the Black Sea and Jablanica Pass into the Balkans.

- The Imperial Japanese Navy: War Plans & War 1922–1941: By the early 1920s, naval planners took it for granted competing interests in the Far East would lead to war. The Japanese saw the US as their main enemy in that war. The US Navy was stronger than Japan’s and America had a larger industrial base. Here is how the Japanese planned to win that coming war despite those disadvantages.

- Mexican & Brazilian Air Forces: Though their stories are little known outside their own home countries today, both Mexico and Brazil, as members of the United Nations Grand Alliance, sent combat fighter squadrons to the Pacific and Europe, respectively. Here is that story.

- United States Army Mechanized Cavalry Groups in World War II: The mechanization of US horse cavalry took place during the 1930s, and doctrine evolved with that change. While pre-war doctrine focused on reconnaissance, the reality of combat dictated cavalry possess the combat power to effectively engage main force enemy units.

Balkans 1944. In late Summer 1944, the Soviets were poised to invade the Balkans after having inflicted a crushing blow to the Wehrmacht at Belarus. On 20 August, after a period of relative calm on the front, the Soviets opened up their offensive between the Black Sea and the Carpathians. Despite the German counterattacks and setbacks such as Debrecen, by Christmas Eve the Red Army was besieging Budapest, joined by the Yugoslav Partisans, and occupied Bulgaria and Romania.