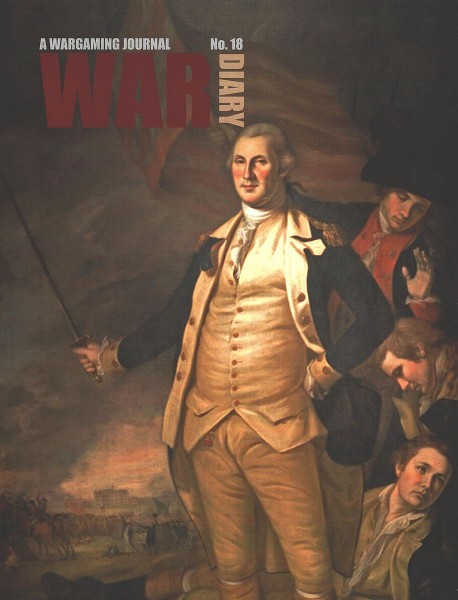 A new wargaming magazine, but decidedly old-school in our approach.

Published quarterly, WAR DIARY magazine publishes no games but instead concentrates on thoroughly examining existing games from a wide range of game publishers, both large and small.  Each issue contains historical articles with tie-ins to gaming topics;  new game scenarios, variants, and expansions; game and book reviews; interviews with notable gaming personalities; and articles on game strategy and good play.  Contributors include an interesting mix of both well-known and new writers, each with a unique perspective.

THE WINTER SOLDIERS: The Battles of Princeton and Trenton, 1776-1777 by John Heim. The designer of The Day is Ours: The Battle of Princeton, 1777, looks at the historical background of these two iconic battles.

BROTHERHOOD & UNITY: A Review by John D. Burtt. This time the esteemed reviewer looks at this game of modern war in Bosnia.

RETURN TO THE ROCK: Corregidor, 1945 by Michael Rinella. The noted game designer presents an overview of this Pacific War battle, with some notes on gaming this unique battle.

A LEADERSHIP VARIANT FOR THE NAPOLEONIC 20 SERIES by George Kasnic. Rules for introducing leaders into this Napoleonic game series.

ADVENTURES IN DIE-CUTTING by Andy Loakes. An introduction to do-it-yourself die-cutting.

ON GAMING: Alternate History and Game Design by Lewis Pulsipher. The game designer and pundit looks at how alternative history and gaming go together.

TAKING CAVALRY FOR A RIDE: Optional Cavalry Employment in the Atlanta Campaign by Paul Comben. Here the developer of the game introduces new rules for the realistic employment of cavalry units.

WITH THIS ISSUE: Cards for The Atlanta Campaign and Napoleonic 20 Variant by Blackwell Hird

Shadows of Brimstone - Caverns of Cynder...