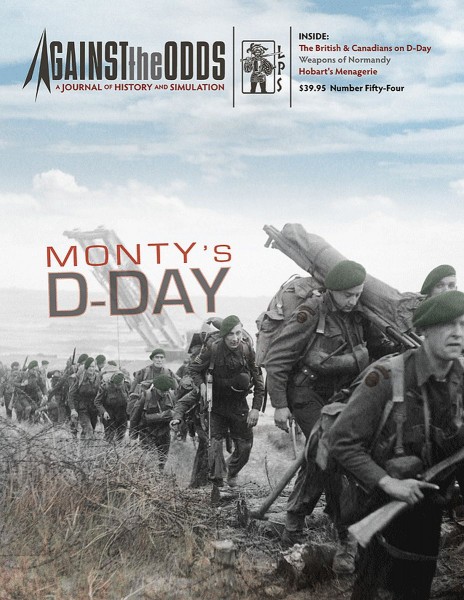 British General Sir Miles Christopher Dempsey, GBE, KCB, DSO, MC, served in both world wars and with considerable competence as brigade, corps, and then army commander in the European theater. Liked and respected, he managed to get along with Montgomery and was highly regarded by him. In fact, it was DEMPSEY in command of the three Anglo-Canadian beaches at Normandy. Technically, all FIVE of the Normandy beaches were "Montgomery's," since he was the commander of the entire army group, with Omar Bradley commanding the American contingents on 2 beaches and Miles Dempsey commanding the three Anglo-Canadian beaches. But can anyone imagine calling this game "Dempsey's D-Day?"

Monty’s D-Day was first published in 1985 and well received, but not widely distributed due to a production error that limited the number of salable copies. Now, four decades later, designer John Prados smoothed and polished the system, added rules for parachute and amphibious landings, Hobart's "funnies", plus new options for German alternative responses. ATO did publish Bradley's D-Day covering the US landings at Utah and Omaha beaches in its Campaign Study #3. Of course, everyone would like Monty’s D-Day to get a similar upgrade. The wild blue yonder hope would be that the two games could combine.

The companion game to Bradley's D-Day, Monty’s D-Day will complete the Normandy Invasion vision by adding the D-Day assault frontage that was targeted by the British Commonwealth forces under Miles Dempsey which -- likely -- got much more of overall commander General Bernard L. Montgomery's attention. Most certainly, the objectives for the Anglo-Canadian beaches sound like Montgomery talking. The city of Caen, nine miles inland, was targeted for capture on D-Day itself. It actually fell in late July, and only after the city had been leveled by bombing. Was it a "city too far?"

But back to the game.

Monty’s D-Day will bring the design fully in-sync and up to the standards set by Bradley's D-Day. And the same wonderful Mark Mahaffey graphic

And, Monty’s D-Day will link to Bradley's D-Day to permit the player to investigate the possibilities of the full panoply of the D-Day invasion, but works perfectly as a stand-alone game on the Anglo-Canadian D-Day landings.

How challenging is it solitaire? - Good