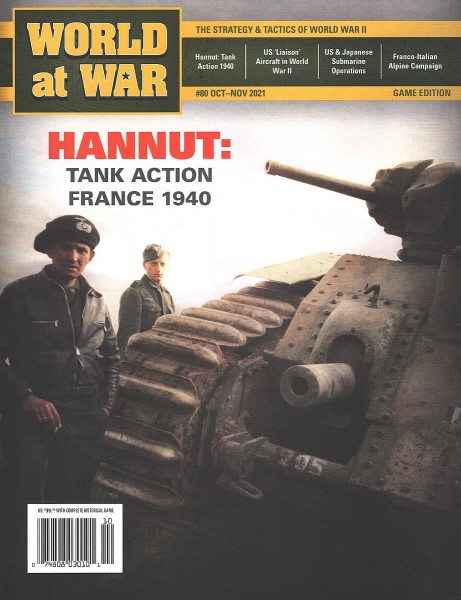 Hannut: Tank Action 1940: In the opening days of the 1940 campaign in the West, French and German armor clashed near the town of Hannut in Belgium. While French tanks acquitted themselves well, they could not prevent the Germans from gaining a stunning victory.

- Eyes in the Sky: Use of US ‘Liaison’ Aircraft in World War II: High performance single and multi-engine tactical aircraft, while essential in helping to win the Second World War, were not the only important air assets employed by the US in that conflict.

- The Franco-Italian Alpine Campaign of 1940: When the Italians finally launched an invasion into southeastern France on 20 June 1940, they slammed into an unbending wall of resistance that refused to crack except in the few places totally lacking fortifications.

Hannut: France 1940 is a two player operational level simulation of the battle fought during the Battle of Belgium that took place between 12 and 14 May 1940 at Hannut in Belgium. The primary purpose of the Germans was to tie down the strongest elements of the French 1st Army and keep it away from the main German attack by Army Group A through the Ardennes. The delay was to entice the Allies into believing the main thrust would come through Belgium and then down into France.

The ensuing battle was the largest clash of tanks in armored warfare history at the time. Hannut uses a simplified version of the Grand Operational Simulation Series (GOSS) rules that depict WWII combat at the battalion level. Each hex on the map is one mile. Units are battalions and companies. Each AM and PM game turn (GT) represents about one-half of available daylight hours. Night GTs extend through the hours of darkness.

Blitzkrieg Stalled: The Battle of Arras, 1940

Counter-Attack: The Battle of Arras, 1940