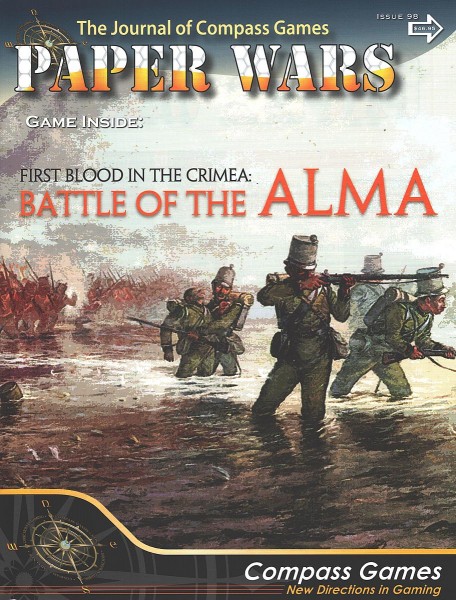 First Blood in the Crimea: The Battle of the Alma, 20 September 1854 by Ty Bomba

This game uses the alternating-actions system introduced here in Wagram. That system places the emphasis on players’ mastery of overall operations rather than on the minutiae of tactics. In effect, players role-play each side’s supreme commander, making the decisions those two men would make rather than the whole command chain, as is often the case many complex tactical-level games.

The battle was the first clash of the Crimean War, fought only a few days after the French, British and Turks had landed on the peninsula and began marching on Sevastopol. Both sides threw in everything they had, hoping for a quick and decisive victory. That made for a day of fierce back and forth combat, which was characterized by both soldier-level heroism and high-command incompetence. In the end the Russians retreated, but it was a near-run thing that could’ve gone either way.

Each large hex on the 34×22” map equals 300 yards (275 meters). Each of the 10 game turns represent 30 to 60 minutes of real time. The units of maneuver are battalions and regiments. Artillery is represented abstractly via bombardment markers.

There is one full sheet of 228 medium-size (5/8”) counters. Playing time is about three hours. Complexity is low-intermediate, and solitaire play is easily doable with only limited ‘fudging’ required. Designed by Ty Bomba.