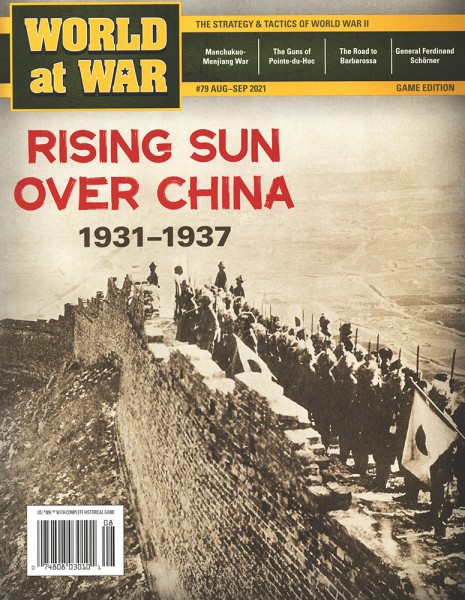 The Magazin:
Manchukuo-Menjiang War: the Japanese-Chinese Conflict 1931–37: From 1931–1937, an undeclared war was fought in northern China as Japan expanded onto the East Asian mainland. This was a largely unknown war but set the stage for the open Japanese invasion of China in July 1937.

The Guns of Pointe-du-Hoc: The top-secret mission of the US Army Rangers to fi nd and destroy the deadly gun battery of Pointe-du-Hoc on 6 June 1944 must surely rank as one of the most audacious special operations of WWII. Here is how they did it.

The Road to Barbarossa: Hitler’s goal was the conquest of the Soviet Union and, with that goal accomplished, to create a greater Germanic Reich. What were the reasons behind the invasion?

Ferdinand Schörner: Hitler’s Ideal General: General Schörner died in 1973, the last remaining Field Marshal of Germany. A die-hard Nazi, he always followed orders and was a severe disciplinarian who sacrificed his troops to his ambitions.

The Game:
Rising Sun Over China: Japan vs China 1931 – 1937 is an operational-strategic level two player wargame covering the campaigns in northern China, 1931 to 1937. These campaigns revolved around the regions of Manchukuo (Manchuria) and Menjiang (Inner Mongolia), and culminated in the Japanese invasion of China proper, taking the capital at Peiping (Peking). There was also the possibility of Soviet intervention. The game has two players: the Japanese Empire and the Republic of China. The Japanese objective is to gain control of northern China to provide a strategic advantage for the ensuing Sino-Japanese War which commenced in July 1937. The Chinese objective is to retain control of strategic regions of northern China, thereby forestalling a larger Japanese invasion. Each hex on the map represents 75 kilometers across. Each turn of play represents one year of operations. Japanese ground units are divisions and brigades. Allied Japanese, as well as most Chinese units, are at the army and corps level, representing shifting arrays of forces. Air units represent various numbers of sorties needed to accomplish missions.

Claws of the Tiger - The Japanese Invasion of...

Durchbruch: The Austro-German Attack at...