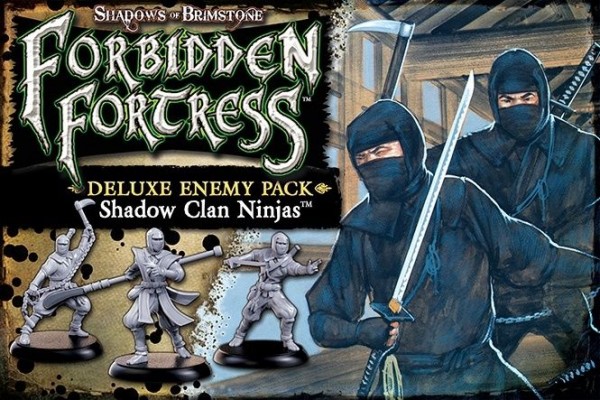 Kidnappers, thieves, and assassins, the Clan Ninja are mercenaries, offering their services to the highest bidder. Lead into battle by ruthless Kosugi Ninja Masters, these stealthy killers move silently, running across rooftops and scaling walls to reach their targets; striking without warning and disappearing back into the shadows. In the struggle for power between rival Samurai houses, Ninja are often employed to accomplish the most sinister objectives.

In the time of chaos since the ‘Sword of Heaven’ struck the mountain, and the Dragons returned to the world, several of the most notorious Ninja Clans have begun working with the forces of Darkness... The Shadow Clans! These treacherous assassins have betrayed their own world for the promise of untold riches and power, while others have declared their own bid for domination, searching endlessly for mystical artifacts imbued with the power of the Void to fuel their twisted ambitions.

This Deluxe Enemy Pack contains everything you need to add sinister Shadow Clan Ninja and their ruthless Kosugi Ninja Masters to your games of Shadows of Brimstone! Included are 6 Clan Ninja models and 1 Kosugi Ninja Master model, the 2 large Enemy Record Sheets for them, a host of new cards themed around these shadowy assassins that have sworn their allegiance to the Darkness - including all of the Threat Cards needed to add them to your games, and 2 new Missions focusing on these deadly new Enemies!

The Battle of Armageddon - Apocalyptic Warfare...

Gloomhaven - Jaws of the Lion: Removable...

Call to Adventure: The Stormlight Archive