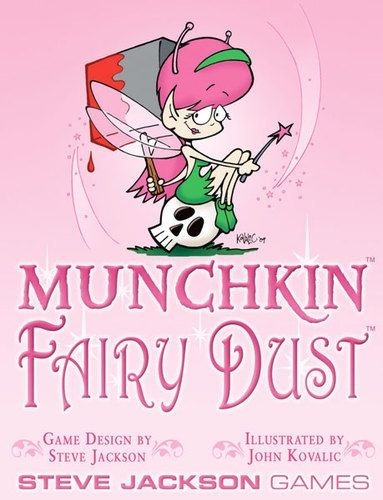 Meet the Sparkly Good Fairy. She wants all the munchkins to play nice, and she's willing to bash heads to make sure they do. Play her way, and she'll bribe you with Fairy Dust. Otherwise, you might end up fighting her instead. And if you don't take her out, she'll be back again and again . . .

Fairy Dust is a 15-card expansion for classic Munchkin. It introduces the Sparkly Good Fairy and her deck of Fairy Dust cards – extra rewards for munchkins who are willing to help each other. (It's perfectly munchkinly to be nice . . . as long as you get something cool for doing it!) Every card in the set is full-color, with added glittery pink and silver Fairy Dust.

Munchkin Fairy Dust is fun whether you stick with the core Munchkin set or play with all the expansions you can get their hands on. And at less than four bucks, it's a no-brainer!

Fairy Dust is a finseal pack, sold to stores in a POP of ten packs. All packs contain the same 15 cards.