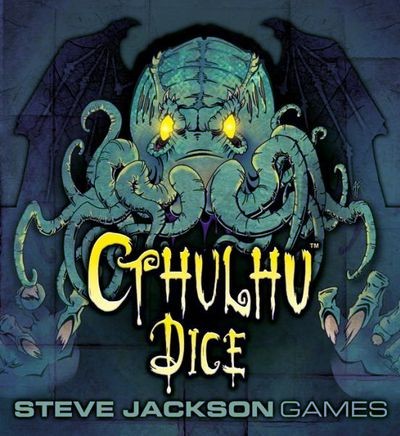 Beschreibung Produkteigenschaften Bewertungen 0
Beschreibung
The reason it's fun, of course, is the fast play and the table talk. Le Boomb is a... mehr
Menü schließen
Produktinformationen "Cthulhu Dice Game - revised"

The reason it's fun, of course, is the fast play and the table talk. Le Boomb is a successful social pastime, even though you make no decisions! Okay, let's learn from that . . . and let's have a game in there, too.

We discussed this with a lot of energy at PAX . . . and on the plane to the ACD show that followed right on its heels . . . and, on and off, through the ACD show. Several things came out of that discussion:

So. Cthulhu it was. Airlines being what they are, I wound up with some time to kill in the Madison airport after the ACD show, so I started writing rules. I decided arbitrarily to use a 12-sider, because the dodecahedron is pretty and doesn't get used very much. The pentagonal faces also have a lot of room for icons.

Icons! I started by making a list of Cthulhoid symbols. The Elder Sign and Yellow Sign were easy, and the tentacle was obvious. And, of course, we had to show Cthulhu himself! Four symbols didn't seem like enough, so I added the Eye of Horus. It doesn't have anything in particular to do with the Mythos, but it's occult-looking . . . and the eye is part of our logo. In-jokes for the win!

So what kind of story did I want to tell about the Mythos? The "players lose their sanity" trope needs no explaining to gamers . . . thanks to Call of Cthulhu, everybody gets that. To make it a competitive game, the players should be attacking each others' sanity. So let each one start with a very little bit of sanity, and take turns knocking each other down, and there you go.

That meant the die symbols needed to relate to gain or loss of sanity. I wanted the balance to be in favor of loss . . . when you're messing around with Cthulhu, a sanity gain should be a rare thing. But possible! In the beginning, I had one "no effect" result on the die, but that quickly revealed itself as Stupid And Boring.