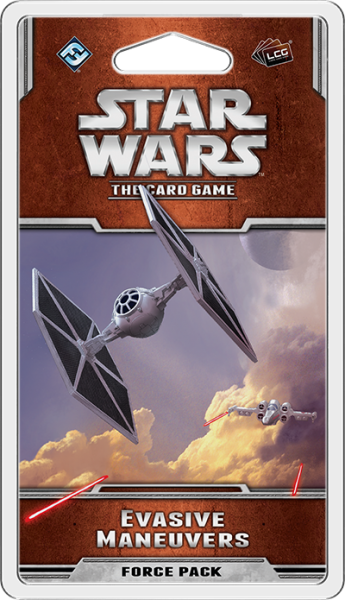 “Sir, the possibility of successfully navigating an asteroid field is approximately 3,720 to one.” –C-3PO, Star Wars: The Empire Strikes Back

Launch your starfighters and field your ace pilots for Evasive Maneuvers, the third Force Pack in the Rogue Squadron cycle for Star Wars™: The Card Game. This Force Pack continues the main themes of the Rogue Squadron cycle, offering new pilots to fly your starships to victory. In this Force Pack, you’ll find iconic characters and ships, such as the Jedi Vima-Da-Boda and the immense Capital Ship, Independence.

Whether you prefer to scramble your Fighters or command massive Capital Ships, you’ll find cards to support your affiliation in the ten new objective sets (two copies each of five unique sets) included in this Force Pack. Whether you hide from the Empire with an ancient Jedi, interrogate prisoners with the Sith, or hire a deadly assassin in a dusty cantina on Tatooine, the cards you need can be found in Evasive Maneuvers.