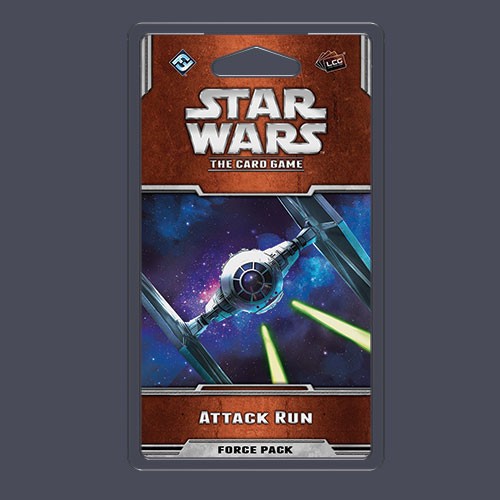 “The battle station is heavily shielded and carries a firepower greater than half the star fleet. Its defenses are designed around a direct, large-scale assault. A small one-man fighter should be able to penetrate the outer defense.”
–General Dodonna, Star Wars: A New Hope

Relive the climax of Star Wars: A New Hope with Attack Run, the fourth Force Pack in the Rogue Squadron cycle for Star Wars™: The Card Game. Within this Force Pack, you’ll find new versions of iconic heroes and villains, alongside the starships they fly. This Force Pack continues the main themes of the Rogue Squadron cycle with pilots like Luke Skywalker, Darth Vader, and Boba Fett.
Whether you pilot Slave I for the Scum and Villainy of the galaxy or fly a B-wing with Keyan Farlander, you’ll find cards to support your affiliation of choice with the ten objective sets (two copies each of five unique sets) in this Force Pack. Evade authorities with the Smugglers and Spies, pilot Vader’s unique TIE Advanced, or fly into the Death Star’s vulnerable trench and start your Attack Run!