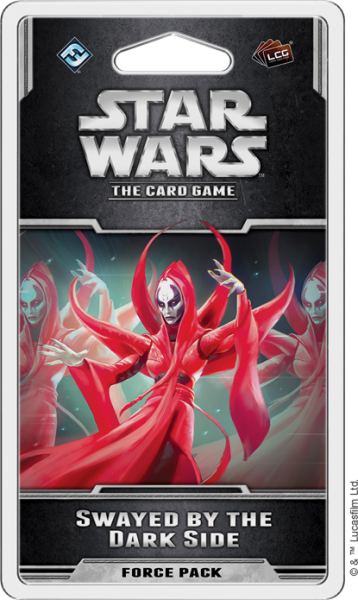 Beschreibung Produkteigenschaften Bewertungen 0
Beschreibung
"You're Black Krrsantan. The infamous Wookiee bounty hunter. I've heard of you. I know why you... mehr
Menü schließen
Produktinformationen "Star Wars LCG: Swayed by the Dark Side"

"You're Black Krrsantan. The infamous Wookiee bounty hunter. I've heard of you. I know why you were forced to leave Kashyyyk. And how you've disgraced your people ever since."
—Obi-Wan Kenobi to Black Krrsantan

Swayed by the Dark Side is the fourth Force Pack in the Alliances cycle for Star Wars™: The Card Game. Its sixty new cards (divided between two copies each of five different objective sets), continue to explore the bonds of friendship, duty, and honor that drive many of the galaxy's pilots and soldiers, as well as the fear, hope, and greed that compel others to take action.

Among these new objective sets, you'll find new units and tactics for the Sith, Imperials, Scum, Jedi, and Rebels. You'll find cards to carry you from the Imperial strongholds of the Core Worlds to the forested moons of the Outer Rim. You'll find new enhancements, events, and Fate cards that support decks built around multiple affiliations. And you'll find a number of recognizable, high-impact characters taken straight from the films and Marvel comics, including Biggs Darklighter, the Ewok Logray, and the notorious Wookiee bounty hunter Black Krrsantan!

This is not a standalone game experience. Requires a copy of the Star Wars™: The Card Game Core Set to play.