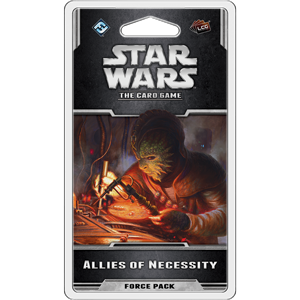 Beschreibung Produkteigenschaften Bewertungen 0
Beschreibung
“Do you want to know the odds of her using that blaster on you? It’s high. It’s very high.”... mehr
Menü schließen
Produktinformationen "Star Wars LCG: Allies of Necessity"

“Do you want to know the odds of her using that blaster on you? It’s high. It’s very high.”
–K-2SO, Rogue One

If anything defines the Star Wars saga more than the lightsaber duels, blaster firefights, and epic space battles, it’s the friendships that emerge out of hardship and necessity. Whether it’s Luke Skywalker and Obi-Wan Kenobi looking for a smuggler to take them offworld or ex-convict Jyn Erso forced to work with a ragtag group of Rebels, outcasts, and Imperial defectors, these alliances can determine the fate of the entire galaxy.

Within Allies of Necessity and the new Alliances cycle for Star Wars™: The Card Game, you gain plenty of incentives to bring multiple affiliations together. While multi-affiliation decks have always been a possibility, Allies of Necessity offers more tools to help you than ever before—starting with new affiliation cards, which offer new deckbuilding requirements and special abilities. What’s more, you’ll find iconic characters from Rogue One, Star Wars Rebels, and the Darth Vader comics throughout the cycle: in fact, this first Force Pack includes Doctor Aphra, Director Krennic, Captain Cassian Andor, and Jyn Erso.