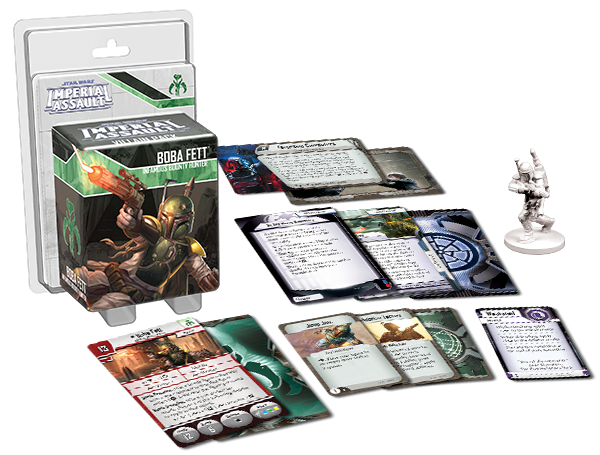 Many bounty hunters ply their trade throughout the galaxy, chasing down and capturing their quarries. These men and women are well known as hard fighters and relentless pursuers, but even among the bounty hunters, there is one who has forged a reputation for his brutality and skill. Now, you can hire Boba Fett – the most feared bounty hunter in the galaxy – for any Imperial Assault mission you may undertake.

Boba Fett is a valuable asset for any servant of the dark side. Whether you hire him for a campaign or a skirmish mission, his formidable abilities and explosive armaments make him a deadly opponent. In addition to Boba Fett’s own talents, you can also use the Soldiers for Hire agenda set to harry the heroes between missions. You can ground and attack a Rebel supply convoy on Yavin 4 in a new side mission and you can use any means necessary to take down a targeted hero during a mission.

In your skirmish games, the new skirmish upgrade and Command cards included in the Boba Fett Villain Pack can provide a crucial advantage over your opponent. With Jump Jets , for instance, you can fly across the battlefield, cutting off your target’s escape or quickly bypassing any obstacles that stand between you and a mission objective. Whether you battle through the new Imperial Space Station map or engage in another skirmish mission, this figure pack has plenty to offer to every player.