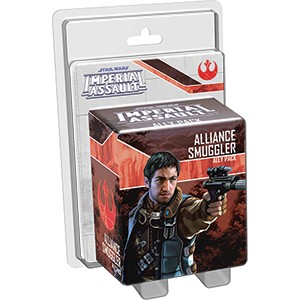 The Rebellion may prefer not to deal with criminals, but the Rebels still need the services of dedicated smugglers. You gain a single Alliance Smuggler in the Alliance Smugger Ally Pack for Imperial Assault, alongside new missions and cards to enhance both campaigns and skirmishes.

You can smuggle supplies past your opponents in a skirmish game to claim additional victory points or race to recover the cargo of a tramp freighter in a new campaign side mission. With the ability to slip past your opponents and hold his own in a fight, the Alliance Smuggler is a worthy addition to any strike team.

Content:
A Wave IV Rebel faction figure pack for Imperial Assault
Introduces one sculpted Alliance Smuggler figure, along with new missions and other cards
A campaign side mission invites you to recover the cargo of a downed Rebel freighter
Two skirmish missions challenge you to slip by your foes or engage in a smuggling run
New Mission cards, Command cards, and Deployment cards open plenty of tactical possibilities