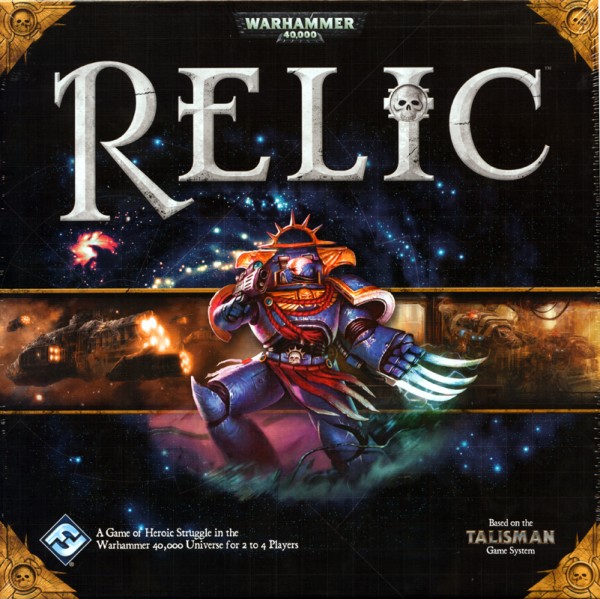 Beschreibung Produkteigenschaften Bewertungen 0
Beschreibung
Relic is a board game in which two to four players each assume the role of a powerful hero... mehr
Menü schließen
Produktinformationen "Relic - The Board Game"

Relic is a board game in which two to four players each assume the role of a powerful hero from the Warhammer 40,000 universe and bravely venture forth to shield the Antian Sector from certain doom. By completing missions and defeating enemies, characters compete to gain rewards and experience, furthering their chance of being the first to defeat whatever evil lies beyond the Warp rift.

Ten Characters, Five Scenarios, Infinite Adventure: Building on the foundations of the Talisman system, Relic is a standalone game in which seemingly straightforward choices mask scores of possibilities. On each turn, a player rolls a single six-sided die, then moves his playing piece that number of spaces clockwise or counter-clockwise around the region (outer, middle, or inner) of the board it currently occupies. Players then draw cards from one of three distinct decks, pitting their heroic personas against foul enemies, dangerous locations, and fantastic strangers. And all the while, these intrepid heroes rise in power, as they work their way toward the ultimate goal at the center of the sector. Although it’s based on Talisman, however, a number of noteworthy differences set Relic apart. First, rather than one deck of Adventure cards that determines the allies and obstacles to found on each space, Relic has three distinct Threat decks, each of which focuses on a different foe in the Antian Sector. After landing on a space with a red icon, for instance, a player draws from the red Threat deck, which features tests of strength and an abundance of Ork-related events, enemies, and locations. Similarly, the blue Threat deck tends to challenge a character’s willpower attribute and features the vile Tyranids, while the gold Threat deck includes tests of cunning and a focus on the clever Eldar.

This, along with a sophisticated and varied system for “leveling up,” corruption cards that bestow both benefits and disadvantages, and secret missions that reward players with powerful equipment (among much more!), ensures that Relic is its own unique game experience while still staying true to its familiar Talisman roots.

Immerse Yourself in a Grim Future

A beautifully detailed game board depicts the major areas of the Antian Sector, immersing players in the grim darkness of the far future. The Outer Region is where all characters begin, taking their first steps toward epic success or ignominious failure, and its twenty-four spaces circle the edge of the board. Beyond lies the Middle Region, separated by the perilous Webway Portal and beckoning all true heroes to face its many challenges. Finally, in the deadly Inner Region, where only the Imperium’s mightiest dare travel, the final test can be found. Dare you face it? Each region consists of areas, adjacent spaces distinguished by a title and unified by a single panoramic art piece. In addition to the various game effects that interact with them, these areas add to the sense of a living, breathing sector of space. Will you face the mutant warlord of the Hive World Vaulgast? Try your luck against the cunning Vexigar on Morgaryth, the burning Death World? The galaxy is full of both dangers and riches, and it’s up to you to explore both. In addition, ten plastic playing pieces represent your characters with striking detail. Each character is represented by a small plastic bust that attaches to a colored base. These detailed playing pieces representing characters like the Ratling Sniper, Ogryn, and Callidus Assassin with style.