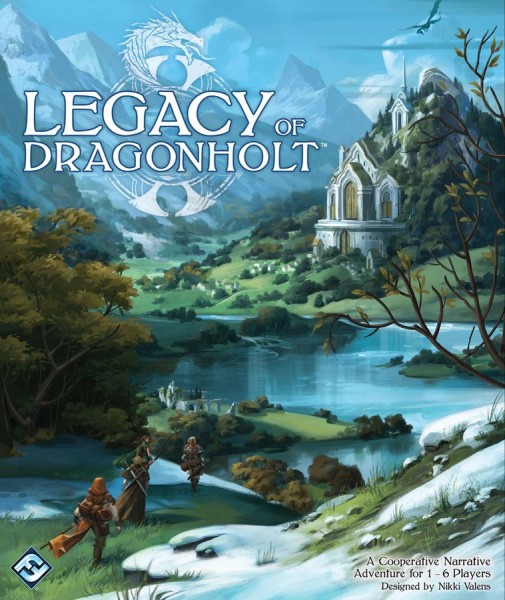 Beschreibung Produkteigenschaften Bewertungen 0
Beschreibung
I write to you because I fear something sinister is at work here in Dragonholt, and I require... mehr
Menü schließen
Produktinformationen "Legacy of Dragonholt"

I write to you because I fear something sinister is at work here in Dragonholt, and I require your assistance. I dare not say more openly, as I think it likely this message will be intercepted. I can trust no one here to help me with this matter; after that business in Nerekhall I have only you and a small handful of other allies left.
Please help me. There is more at stake than you know.
– Celyse

After the heir of Dragonholt dies under mysterious circumstances, you receive a letter from an old friend pleading for your aide. Celyse suspects foul play from the slighted exile, Kyric, who was the young royal’s rival as rightful ruler. All clues point to him as the main suspect, but there is more to this story than what's visible on the surface. You must assemble a team of heroes to investigate this death and stop Kyric from usurping the ancient seat of Dragonholt.

Fantasy Flight Games is pleased to announce a new cooperative narrative game in Legacy of Dragonholt! The first game to use the Oracle system, Legacy of Dragonholt contains six quests set in the Runebound universe that take as many as six daring heroes to the outskirts of Terrinoth. Adventurers build their own stories by making choices that will lead into dark caves and dangerous forests, pit them against cunning bandits and vicious monsters, earn them wealth and fame, and hopefully bring them to foil the plot of an evil overlord.

This narrative adventure game allows players to become bold heroes of the fantasy realm of Terrinoth by designing characters to fit their unique personalities. To build their rich story experience, players select a race and class, create a personal description, and choose their skills. These are recorded on character sheets that heroes hold for easy reference throughout their adventures.

Players may choose to become one of six different humanoid races that inhabit this land. Adventurers can be resilient humans, powerful orcs, vigorous dwarves, graceful elves, crafty gnomes, or agile catfolk. Each race comes with their own unique set of abilities based on the rich history of their people. All of this and more can be found in the Legacy of Dragonholt comprehensive Character Creation booklet that details the physical appearances, cultures, and histories of each race.

But a hero’s appearance is only a fraction of who they are. Their training, talents, and tactics (as detailed in a hero’s class) make up the meat of their gameplay and are primarily used in their explorations. A player may choose to become either an apothecary, bard, brawler, knight, sage, thief, or wildlander. A key strategy for a successful team is to choose classes that complement each other so that their collective abilities are balanced and refined. A troupe of singing bards may not last long against a goblin horde, while a team of knights may die in battle without an apothecary to heal them. By banding together a diverse group of adventurers, your team is sure to find success in the trials ahead.