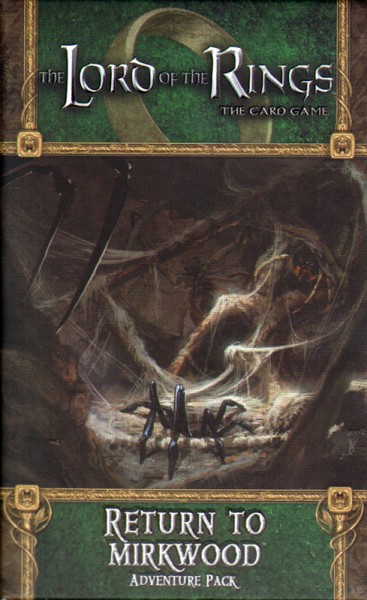 Beschreibung Produkteigenschaften Bewertungen 0
Beschreibung
After a long and difficult hunt, the heroes of Middle-earth have captured Gollum and now escort... mehr
Menü schließen
Produktinformationen "Lord of the Rings LCG: Return to Mirkwood"

After a long and difficult hunt, the heroes of Middle-earth have captured Gollum and now escort their prisoner back to King Thranduil’s palace in Mirkwood. There, Gandalf the Grey hopes to interrogate the wretched creature for the information he suspects may keep the One Ring out of the Dark Lord’s clutches. But the journey back won’t be easy!

The sixth and conclusive Adventure Pack in the Shadows of Mirkwood cycle, Return to Mirkwood puts your heroes in the difficult position of escorting Gollum through some of the darkest and most dangerous locations of Mirkwood forest. New predators stalk through the forest, drawn by Gollum’s tantrums.

Return to Mirkwood expands the card pool for

The Lord of the Rings: The Card Game with 60 new cards, including a challenging new Quest, a new hero, and three copies each of new attachments, allies, and events.

This is not a stand-alone deck. A copy of The Lord of the Rings: The Core Set is required to play.