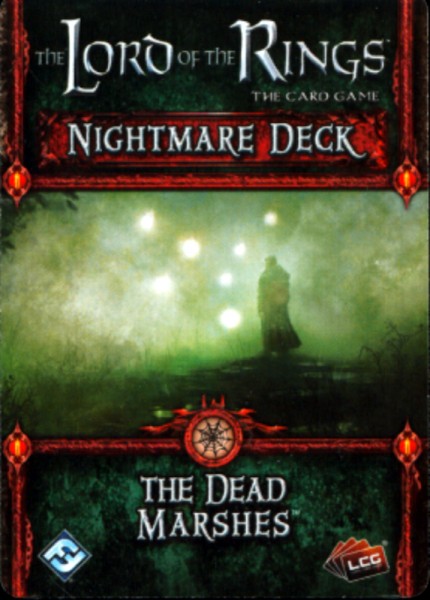 Nightmare Decks for The Lord of the Rings: The Card Game allow you to revisit your favorite scenarios cast in the shadows of the game's challenging Nightmare Mode. Featuring deadlier enemies, darker locations, and more terrifying surprises, each Nightmare Deck introduces new, alternate encounter cards and instructions for using them to reshape a scenario's encounter deck. The result? A nightmarish journey through territory you thought you knew, but with twists and turns that will have you on the edge of your seat!

In the Nightmare Mode of The Dead Marshes, the dead rise from the swamps to assault Middle-earth’s heroes even as they close in upon Gollum. To capture Gollum, your heroes will have to fight back hosts of terrifying Undead, navigate the treacherous Dead Marshes, and prevent him from escaping. Will you succeed, or will Gollum elude you once and for all?

Nightmare Decks are available via FFG's in-house manufacturing and may differ subtly in appearance and texture from Core Set cards. Players are thus encouraged to utilize opaque or art sleeves while playing in Nightmare Mode.

This is not a stand-alone product. A copy of The Lord of the Rings: The Core Set is required to play.