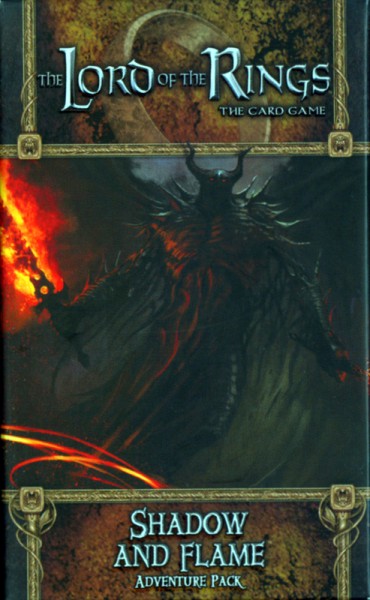 Beschreibung Produkteigenschaften Bewertungen 0
Beschreibung
The ranks of the orcs had opened, and they crowded away, as if they themselves were afraid.... mehr
Menü schließen
Produktinformationen "Lord of the Rings LCG: Shadow and Flame"

The ranks of the orcs had opened, and they crowded away, as if they themselves were afraid. Something was coming up behind them. What it was could not be seen: it was like a great shadow, in the middle of which was a dark form, of man-shape maybe, yet greater; and a power and terror seemed to be in it and to go before it.
–The Fellowship of the Ring

The heroes of Middle-earth have been tasked by Elrond to find the root of the increased Orc activity in the Misty Mountains. Through treacherous mountain passes, goblin ambushes, dark tunnels, and underground waterways, their journey leads them at last to the depths of Moria… and the terrible discovery that awaits them!

Shadow and Flame is the climactic final Adventure Pack in the Dwarrowdelf cycle for The Lord of the Rings: The Card Game. Its 60 cards introduce a new hero, three copies of each player card, and an all-new scenario that pits your heroes against a demon from the times of Morgoth in the fight of their lives.