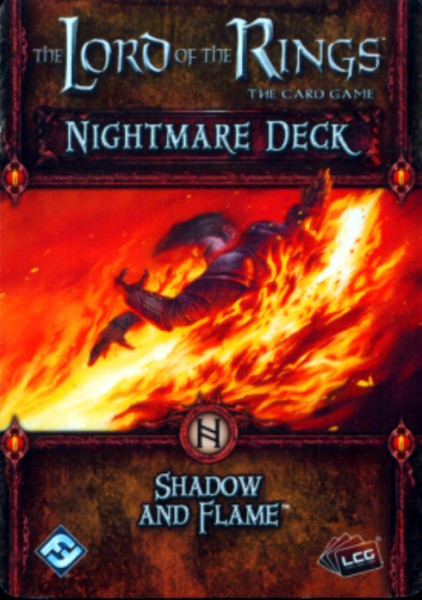 Nightmare Decks for The Lord of the Rings: The Card Game allow you to revisit your favorite scenarios cast in the shadows of the game's challenging Nightmare Mode. Featuring deadlier enemies, darker locations, and more terrifying surprises, each Nightmare Deck introduces new, alternate encounter cards and instructions for using them to reshape a scenario's encounter deck. The result? A nightmarish journey through territory you thought you knew, but with twists and turns that will have you on the edge of your seat!

The Shadow and Flame Nightmare Deck will send chills along your spine as you head into desperate battle against one of Middle-earth’s most terrifying creatures, the Balrog of Moria! The Balrog is one of the game's most iconic and powerful enemies, and in Nightmare Mode, a range of devastating new shadow effects allow this demon of shadow and flame to disrupt nearly every archetypal player strategy, making your battle more dynamic, responsive, and terrifying than ever!

Nightmare Decks are available via Print on Demand and may differ subtly in appearance and texture from Core Set cards. Players are thus encouraged to utilize opaque or art sleeves while playing in Nightmare Mode.