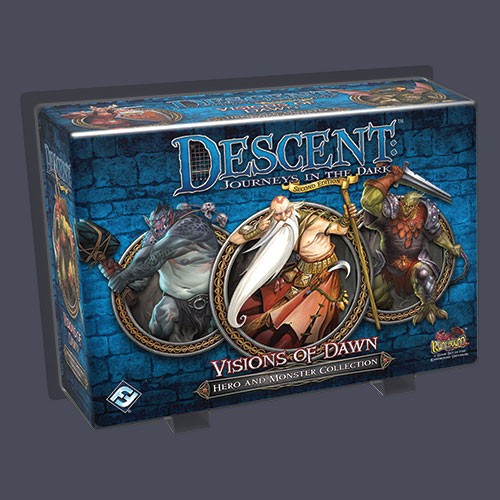 Beschreibung Produkteigenschaften Bewertungen 0
Beschreibung
A dread alliance of ogres and trolls has been formed! Only you can keep this scourge from... mehr
Menü schließen
Produktinformationen "Descent 2nd Edition - Visions of Dawn"

A dread alliance of ogres and trolls has been formed! Only you can keep this scourge from sweeping across Terrinoth in the Visions of Dawn Hero and Monster Collection! In this Hero and Monster Collection, you’ll find ten plastic figures, previously only available in the first edition of Descent: Journeys in the Dark, now reimagined with new figure sculpts and artwork. In addition to these detailed figures, you’ll find two brand-new quests chronicling your battles against some of the realm's most fearsome monsters.

Four heroes unite to shatter the truce between ogres and trolls in this expansion. You can draw blades alongside Nara the Fang or Sir Valadir, magically move about the battlefield with Master Thorn, or work to heal your allies with Ispher. The overlord’s monsters stand to oppose these noble heroes, however. Two trolls, two ogres, and two manticores arrive to swell the overlord’s forces and wreak havoc across Terrinoth.