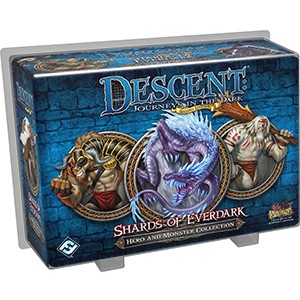 Embark on a new adventure in Shards of Everdark, the latest Hero and Monster Collection for Descent: Journeys in the Dark. In addition to the return of reimagined heroes and monsters, Shards of Everdark offers two brand-new quests, tasking you with saving the world from Everdark’s corrupt servants.

Shards of Everdark reintroduces four fearless heroes, Arvel Worldwalker, One Fist, Karnon, and Steelhorns, all prepared to take on the overlord player in order to eliminate the Everdark’s most dreadful monsters—ice wyrms, shades, and an entirely new monster group: the dark minotaurs. Destroy the source of the Everdark shards and rescue the corrupted citizens of Terrinoth from a dark and troubling fate.