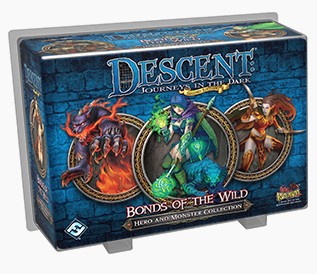 In this Hero and Monster Collection, you’ll find twenty-two plastic figures, previously only available in the first edition of Descent: Journeys in the Dark, now reimagined with new figure sculpts and artwork. In addition to these detailed figures, you’ll find two brand-new quests chronicling your quest for the healing power of the Tree of Life.

Four heroes gather together and venture into the wild in this expansion. You can work magic alongside Lyssa or Challara, or rely on the aid of your familiars with Vyrah the Falconer or Ronan of the Wild. The overlord’s monsters stand to oppose these noble heroes, however. Twelve kobolds, four hellhounds, and two deep elves oppose the heroes' quest and seek the branch for their own nefarious ends.