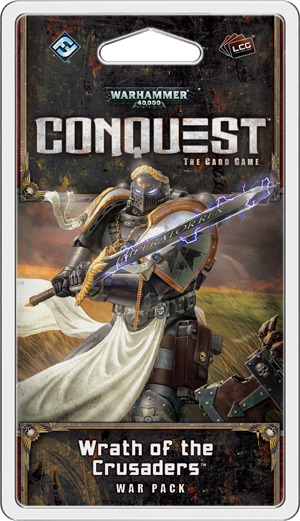 Beschreibung Produkteigenschaften Bewertungen 0
Beschreibung
“We are the burning flame that shines in this world’s darkest hour.” –Chaplain Mavros The... mehr
Menü schließen
Produktinformationen "Conquest LCG: Wrath of the Crusaders"


“We are the burning flame that shines in this world’s darkest hour.” –Chaplain Mavros

The Astra Militarum fights desperately to hold Sacaellum against an onslaught of xenos and Warp-born monstrosities. In the midst of this worldwide battle, a detachment of the Black Templars arrives. They have not come to save this planet, but to recover the holy relics of St. Camila—relics infinitely more valuable than the planet and the lives of all who live there. Lead their mission in Wrath of the Crusaders, the fifth War Pack in the Planetfall cycle!

Like the other War Packs of the Planetfall cycle, Wrath of the Crusaders offers new play styles and gives planet type symbols significance beyond achieving victory. When you fight on the planets that align with your faction’s goals, you’ll quickly discover that your armies become much more effective. This War Pack offers a new Space Marines warlord and his eight-card signature squad, along with fifty-one cards for other factions (three copies each of seventeen distinct cards). When the Black Templars arrive on Sacaellum, you decide the success or failure of their quest!