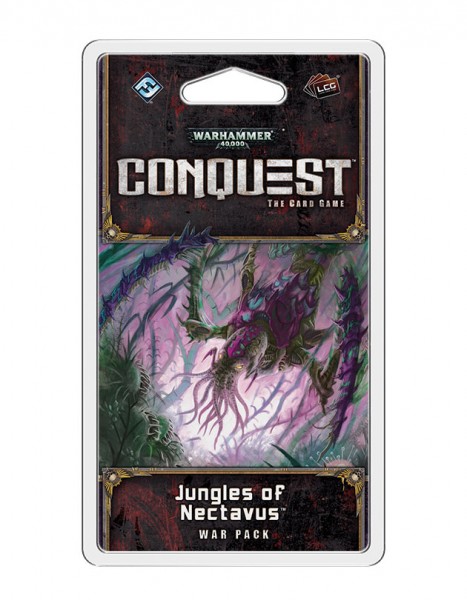 Jungles of Nectavus is the first War Pack in the Death World cycle, and as such, it serves as an introduction to the themes and mechanics that pervade the rest of the cycle. Here, every faction enters the jungles of Nectavus VI, and you’ll need to embrace new tactics to survive in such a hostile environment.

On this world, drawing attention to yourself can be a death sentence, so a new keyword allows you to deploy your cards secretly, only revealing them as the battle is about to begin.

The Death World cycle also brings a new focus to each factions’ Elite units, making them a more integral part of your armies than ever before!

For much of the Imperium, a Death World is a place you will never see—and never want to see. On Nectavus VI, the entire planet is covered by jungle, and everything in that jungle is trying to kill you. The trees and vines spray poisonous spikes at whatever comes near. The animals that dwell within the jungle can strike invisibly from the shadows or simply use their brute strength and unreasoning resilience to crush their foes. Nectavus VI is an unquestionable Death World, yet it is about to become the site of another massive battle for the Traxis sector…

This is not a stand alone game. You need Conquest the card game to play with it!