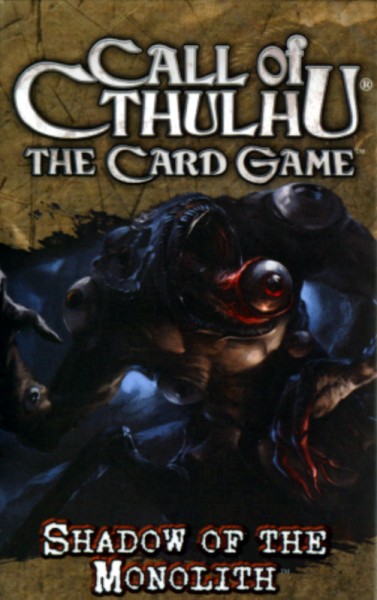 Beschreibung Produkteigenschaften Bewertungen 0
Beschreibung
Despite its enormous magnitude, and its position in an abyss which had yawned at the bottom... mehr
Menü schließen
Produktinformationen "Call of Cthulhu LCG: Shadow of the Monolith"

Despite its enormous magnitude, and its position in an abyss which had yawned at the bottom of the sea since the world was young, I perceived beyond a doubt that the strange object was a well-shaped monolith whose massive bulk had known the workmanship and perhaps the worship of living and thinking creatures.
–H. P. Lovecraft, Dagon

Pull back the final veils shielding you from the truth in Shadow of the Monolith, the sixth Asylum Pack in the Ancient Relics cycle. As the different factions of Call of Cthulhu travel to the South Pacific, they are greeted by malevolent cultists and their dark spells. Who will prosper when the region’s Relics are unearthed? Who will gain power when the region’s secrets are revealed? Who will fall mad or die along the way?

The 60 cards (3 copies each of 20 different cards) in Shadow of the Monolith conclude the Ancient Relics cycle’s exploration of the Ancient Ones’ global reach, but as the different factions take the final steps in their race to acquire powerful Relics, the secrets they discover aren’t for the feint of heart!

Contains cards 101-120 of the Ancient Relics cycle. This is not a standalone deck; you must have additional Call of Cthulhu LCG cards to play.