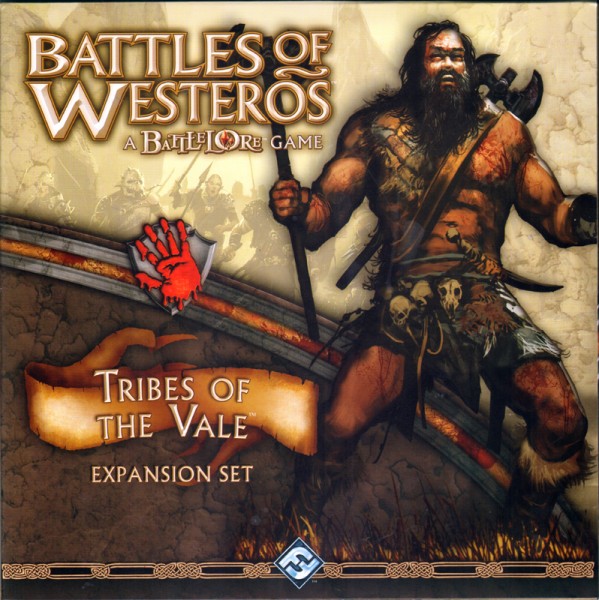 Beschreibung Produkteigenschaften Bewertungen 0
Beschreibung
Born in the cruel climate of the Mountains of the Moon, the clansmen of the Stone Crows, Black... mehr
Menü schließen
Produktinformationen "Battlelore: Battles of Westeros - Tribes of the Vale"

Born in the cruel climate of the Mountains of the Moon, the clansmen of the Stone Crows, Black Ears, and Burned Men are of a violent breed. Uncivilized, uncouth, and unrefined, these men and women live to kill, and they do it well.

Tribes of the Vale introduces the clansmen to Battles of Westeros as an ally force, meaning they can supplement House Lannister or, if playing with the Skirmish rules, House Stark from the Core Set. Ally forces such as those found in Tribes of the Vale are represented as tan colored miniatures on the board, differentiating them from the forces of the house they are supporting. This provides greater customization for Skirmish battles and allows players to easily find their allied troops on the field during battle.

Included in Tribes of the Vale are are three new commanders and three new unit types. Shagga, Son of Dolf is a ruthless barbarian of the Stone Crows, capable of wielding two massive battle axes better than some men handle one. Timett, Son of Timett earned his place as the Red Hand of the Burned Men by taking out his own eye. A fearless expert swordsmen, Timett rarely fails to kill anyone he means to. Finally, Chella, Daughter of Cheyk is a vicious woman, decorating herself with the ears of her enemies.

In addition to these new forces, Tribes of the Vale also comes with a rules and battle plan book, new terrain, and Clansmen Gambit and Skirmish cards.