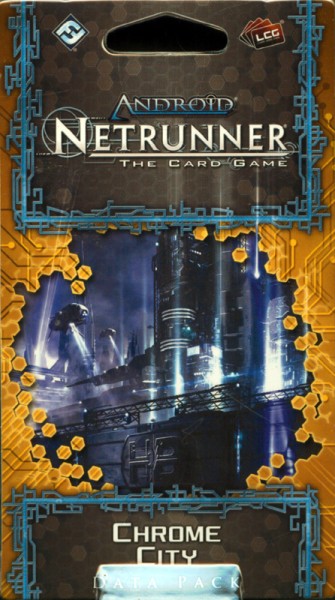 Lopez is part of a fast-growing community in Chrome City and across the West Coast. They call themselves chromeheads, and they wear their implants as fashion accessories.

Function breeds fashion in Chrome City, the third Data Pack in the SanSan Cycle for Android: Netrunner! Sixty new cards (three copies each of twenty individual cards) introduce players to the northern SanSan borough of Chrome City. Here, among the sketchy chop shops planted in the shadow of Haas-Bioroid’s genetics division, a growing community of chromeheads have begun to transform cybernetics into fashion statements.

If the surgery’s good, the latest cybernetics don’t just make you trendy; they also make you smarter, stronger, and more resilient. But a bad chopper’s just as likely to cause you irreparable brain damage as outfit you for the runways.

Accordingly, Chrome City and its cybernetic hardware introduce a volatile mixture of risks and rewards, many of which are centered around protecting or damaging the Runner’s brain.

This is not a stand-alone deck. An Android: Netrunner The Card Game core set is required to pl