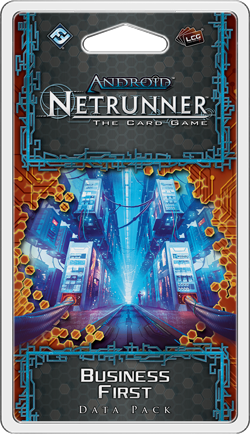 Business First is the second Data Pack in the Mumbad Cycle for Android: Netrunner. Passions flare and Jinteki faces a game-changing crisis as the issue of clone rights rises to prominence during the Indian Union's national elections. With its sixty new cards (including a complete playset of nineteen different cards), Business First explores the tensions and conflicts within this tumultuous environment. Horror stories begin to emerge about the treatment of Jinteki's clones, and you'll find the Corp's public relations division drawing attention to its work with sustainable foods while Haas-Bioroid seeks to capitalize upon the scrutiny directed toward its rival by showcasing its own advanced assembly lines and smartfabrics.

However, the question of clone rights doesn't end with these two megacorps, and you'll find new cards for each of the game's seven factions. Naturally, their responses to the situation at hand vary as wildly their motivations, and you'll find bomb threats, elaborate raids, and populist rallies. What will result from the Indian Union's exploration of clone rights and Jinteki's Business First mentality? Will the clones be granted citizenship? Or will Corporate sales teams help Jinteki successfully rebrand their efforts and lead everyone back to business as usual?

This is not a stand-alone game and it requires Android Netrunner the card game to play with it.