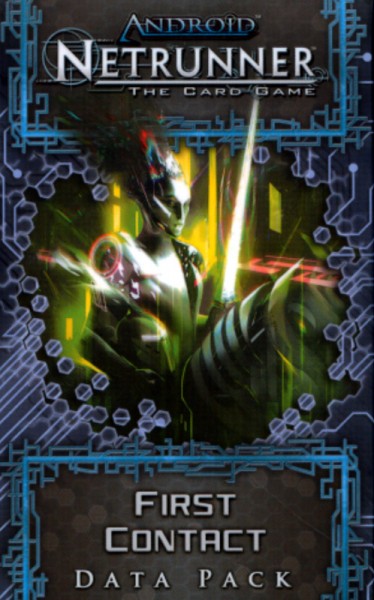 First Contact is the third Data Pack in the "Lunar Cycle" for Android: Netrunner. After heading Upstalk and passing through The Spaces Between, it's time to land on the moon. First Contact shakes up the contests between Corp and Runner by introducing three new region upgrades, mythic ice, new traps, resources, and a new Anarch identity. The Data Pack's sixty cards (three copies each of twenty different cards) also depict a new meat space where gravity is low, people all wear spacesuits, there's only one fully established city, and everything is enclosed. Confined. Watched.

From the remotest edges of Port Anson Grid to the seedy underbelly of Duggar's, First Contact immerses players in a strange and alien setting in which there are very few places the game's Corps don't control completely, everything you thought you knew is just a shade different, and it's all that much more important to find someone to guide you through your ongoing cyberstruggles...

You need the core game Android Netrunner the Card Game to play with this expansion.