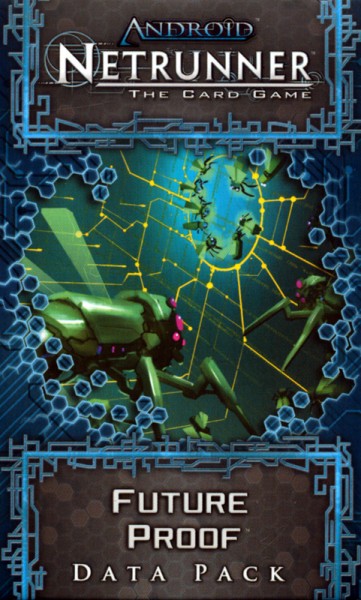 “The stakes have gotten higher than you might have anticipated, Mr. Santiago. We’ll continue to support you as long as this partnership remains profitable, but we strongly recommend that you watch your step.”
–Mr. Li, broker

As the Genesis Cycle draws to a close, the cyberstruggles of Android: Netrunner escalate to the brink of full-scale war in Future Proof, the cycle's sixth and final Data Pack! Runners have used their new ice and upgraded hardware to launch series after series of runs, and Corps have respond by channeling funds into the development of new ice and server upgrades. In a world where the next, stronger piece of ice or game-changing icebreaker is just several lines of code away, what technologies and strategies can truly stand the test of time?

Future Proof concludes the Genesis Cycle with sixty new cards (three copies each of twenty different cards) that balance the latest upgrades in software with a renewed focus on resources in the meat world.

In addition to their innovative new icebreakers, the game’s Runners get new resources and events while the Corporations focus on bolstering their servers and developing assets designed for open hostilities. When tricks, traps, and roadblocks don’t serve as sufficient deterrents, some Corporations will meet the Runners with swords in hand, ready for virtual duels.