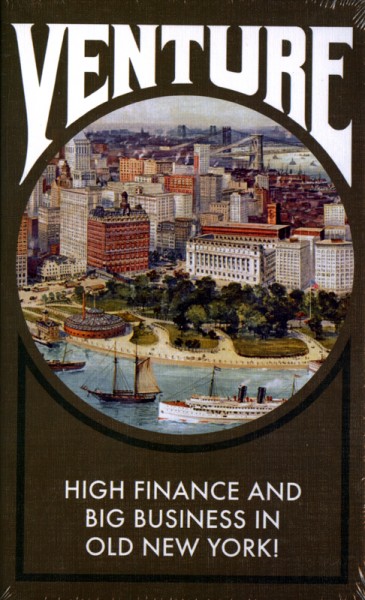 In Venture, players follow in the footsteps of Carnegie and Rockefeller, as they try to acquire lucrative conglomerates, manipulate vast holdings, and instigate proxy fights to gain control of key corporations from other players. The game comes with two decks of cards—Resources and Corporations. The Resource cards picture prominent venture capitalists of the era and provide the millions of dollars which players will use to purchase Corporation cards in six industries: Steel, Oil, Railroads, Real Estate, Automobiles, and Shipping.

During their turn, a player can:
1) Take over Corporations and form conglomerates with two or more corporations;
2) Play Proxy Fight cards to win opponents’ corporations; and
3) Reorganize their holdings (if they can afford it).

The Resource deck has 2 profit cards. Whenever a profit card is drawn, play stops so that profits can be scored. These cards get reshuffled into the deck when needed, so this will happen multiple times during the game.