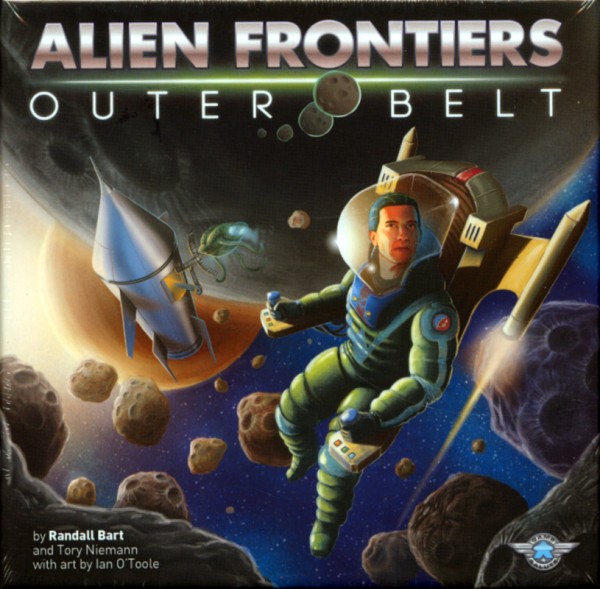 Beyond the orbit of Maxwell’s moon, a ring of asteroids, called the Outer Belt, circles the planet in an elliptical path that brings rare metals, lost ships, disillusioned pilots, and alien relics within reach of the planet.  For ship captains bold enough to set a course for these wandering treasures, outer belt mining and salvage operations can be a profitable adventure.

Includes:
1 Outer Belt Side Board, which goes along the right edge of the main board to show the asteroid belt and expand the moon. The board is double-sided with standard square docks on one side and Rocket Dice docking ports on the other side.
22 Asteroid Cards, representing the resources, alien tech, and eager pilots you'll find by exploring the outer belt.
1 Asteroid Die, which controls the movement of the Asteroid cards.
1 Territory Tile for Blish Expanse, the new territory on the moon!
2 Alien Tech Cards, developed to work with the asteroid belt; one to let you explore the belt more efficiently and one to stop the good asteroids from moving out of range.
2 Agenda Cards, which show how important the asteroid belt is to pirates, explorers, pilots, or anyone who just like to collect interesting stuff floating in space.
3 Dock Cover Chits, provided to demonstrate that even though space is big, your options become smaller when fewer opponents are present to challenge you for control of Planet Maxwell.
1 Rule Book, containing all of the details on the outer belt.
6 Orange D6, plus 8 Orange Colony Domes, and 1 Orange Scoring Rocket give you a larger selection of player colors for your next trip to Planet Maxwell, or, if you so choose, you can invite a fifth player to join in the fun.