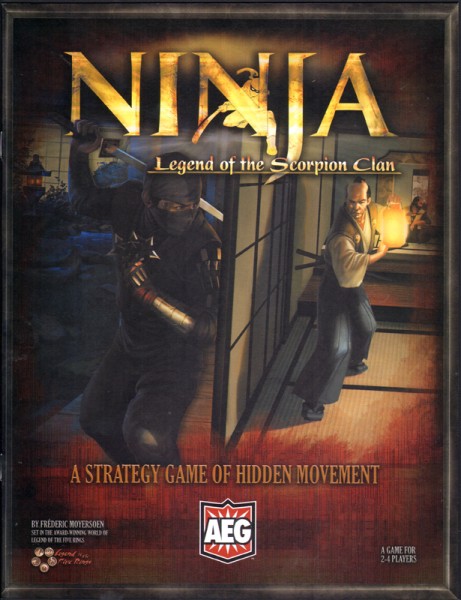 Ninja: Legend of the Scorpion Clan is a new board game coming from Alderac Entertainment Group. Designed by veteran game designer Fréderic Moyersoen, Ninja features fast play, hidden movement, limited information, bluff and guile. It is sure to challenge players and bring hours of enjoyment.

The game centers around one very dangerous night at a castle in the provinces of the Lion Clan. Honorable Lion samurai stand vigilant watch around the castle, protecting it from harm. The Scorpion Clan sends one well trained ninja to infiltrate the castle for nefarious purposes… it may be to assassinate an imperial guest under the Lion’s protection, or poison the well, or steal the daimyo’s war plans for the coming season. Whatever the goal, the ninja has vowed to accomplish it, or die trying. Worse yet for the Lion Clan, the ninja has an accomplice: a traitor among the ranks of the Lion samurai whose true loyalty lies with the Scorpion.

The game is designed for 2–4 players, and plays in less than an hour. With three players, one player handles the guards, one the traitor, and one the ninja (the intruders don’t have to cooperate, either). With 4 players, the guards are split into two teams, which has its own benefits and challenges.