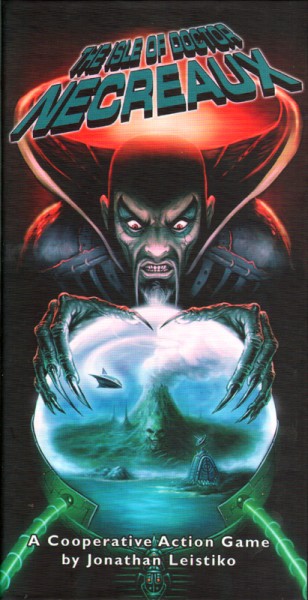 Beschreibung Produkteigenschaften Bewertungen 0
Beschreibung
You are part of an elite rescue-and-recovery espionage team in the world of the future. The... mehr
Menü schließen
Produktinformationen "Island of Dr. Necraux"

You are part of an elite rescue-and-recovery espionage team in the world of the future. The nefarious Doctor Necreaux has kidnapped the world’s top scientists and forced them to build a doomsday device that threatens all life on the planet. Doctor Necreaux’s ultimatum: Surrender to his rule in four hours, or he will trigger the doomsday device and destroy the world.

He must be stopped, but time is running out!

The Isle of Doctor Necreaux is a cooperative card game for 1 to 5 players fighting the diabolical mad scientist Doctor Necreaux. This box set includes 110 cards, dice, counters, and everything you need for your adventure. Easy to learn, with massive replay value, you’ll find yourself wondering what in the world is worth saving when the world itself is held hostage.

Your Mission: Save The World