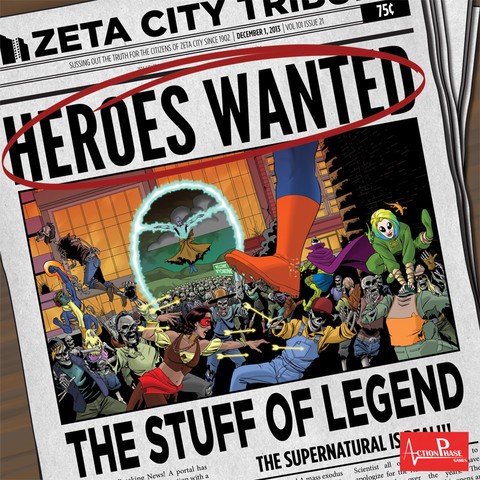 Beschreibung Produkteigenschaften Bewertungen 0
Beschreibung
A dark cloud looms over Zeta City, one that speaks with a forked tongue and tells of ill omens... mehr
Menü schließen
Produktinformationen "Heroes Wanted - The Stuff of Legend"


A dark cloud looms over Zeta City, one that speaks with a forked tongue and tells of ill omens and other generally bad stuff. In the wake of the retirement of Fastodon, the World’s Fastest Mammoth, all manner of foul evil has emerged to wreak havoc. From sinister deities once relegated to myth to arcane menaces who have hovered at the fringes of our mundane world, all have been waiting for just such an opportunity and now return with visions of conquest.After all, one less Champion means one less obstacle in the way of their nefarious machinations. But hope is not lost! As we have learned in recent news, ambitious heroes eager to prove their mettle are patrolling the rooftops and alleys. Among them are practitioners of the mystic arts and noble gods from great pantheons, each able to face the rising tide of villainy for the sake of all that is good and right. A day of decisive battle is descending upon Zeta City, and from it shall emerge… The Stuff of Legend!